‘No oil blocks investigator contacted me’; probe will prove deals above board – Former Natural Resources Minister 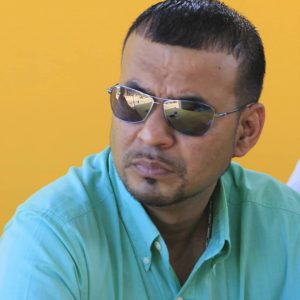 Former Minister of Natural Resources, Robert Persaud on Sunday said no government investigator has questioned him concerning the issuance of oil concessions and he and members of the then People’s Progressive Party Civic (PPPC) administration were not worried about an independent probe.

Officials of the State Assets Recovery Agency (SARA) less than one month ago caused quite a stir locally and internationally when they announced that an independent investigation would be launched into the award of concessions to JHI, Mid-Atlantic Oil and Gas, and Ratio Energy in March 2015 after exactly two years of negotiations. In fact, records show that Ratio was handed a concession one month before Guyanese went to the polls to elect new government, removing the PPP from office for the first time in 23 years.

But on Sunday, in reaction to a report in the privately-owned Stabroek News newspaper, Persaud confined himself to a Facebook post, saying that SARA or no other state agency had questioned him. “I have not been contacted by SARA or any other entity regarding the issue of ‘oil blocks.’ I do support any independent, non-partisan review of the previous and current governments award of petroleum exploration licenses in Guyana’s offshore,” he said.

Persaud, however, disclosed that he had been communicating with Head of the Ministry of the Presidency’s Department of Energy, Dr. Mark Bynoe. “Further, I have been in contact, from time to time with head of the Department of Energy,” he said. Persaud told Demerara Waves Online News that “My interactions with Mark has always been about local content” and that no one in government has ever raised anything about oil concessions with him.

The former Minister of Natural Resources noted that since the David Granger-led coalition took office in May, 2015, “I have always made myself available for clarification and/or elaboration on policy decisions and actions taken in relation to my ministerial portfolios.”

In the past, whenever Demerara Waves Online News had contacted Persaud about Ratio Energy’s concession award, his almost standardised response had been that he was declining to comment and that all of the records are at the Ministry of Natural Resources.

Persaud, who appeared to be increasingly close with Opposition Leader Bharrat Jagdeo and his virtually handpicked presidential candidate, Irfan Ali, grasped the opportunity to praise the PPPC for laying the groundwork for Guyana to become an oil producing nation. “The PPP/C’s achievements and unwavering determination in laying the foundations for Guyana to be an oil producing nation has been both stellar and transparent as well as in full conformity with all relevant laws and regulations,” he said.

Persaud backs President Donald Ramotar’s public commitment to an unbiased, professional independent review that they were confident would confirm “all due legal processes were followed and during the PPP/C time in office the country’s best interest was served, given the realities of the day.

“From the time of the current government’s assumption of office I have always made myself available for clarification and/or elaboration on policy decisions and actions taken in relation to my ministerial portfolios. Further, I have been in contact, from time to time with head of the Department of Energy, ” Persaud stated.

Persaud, a former information czar for the PPPC administration, cautioned against “reckless and presumptive statements by vested interests” saying that they could “further undermine investors’ confidence and even encroach on sanctity of contracts and agreements with local and foreign investors.”

He described SARA’s position as “patently an elections propaganda campaign issue by a politically-controlled state agency and being promoted by sections of the media and so-called oil and gas ‘experts’ and ‘advisors'”.

JHI and Mid-Atlantic have already issued a joint press statement seeking to assure that their principals, John Cullen and Edris Dookie, have 20 years of experience exploring for oil offshore Guyana as the original co-founders of CGX Energy. “Through CGX, they both served Guyana exceptionally, through the drilling of several offshore wells, and especially in relation to the pivotal role they played in the successful resolution of the maritime boundary dispute with Suriname,” they said.

The companies, which have since entered into agreements with ExxonMobil to explore and possibly produce oil from their concessions, have said that no investigators have contacted them.

Previous: OPINION: “One foot in the grave”: The problem of maternal mortality
Next: Cellular phones seized from Georgetown-based prisoners after Facebook post