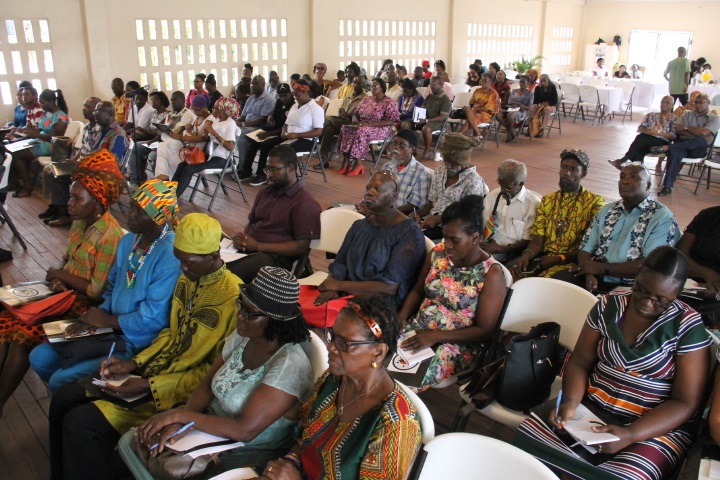 Afro-Guyanese on Sunday signaled they would be accelerating lobbying for a return to village councils because the existing local governance system has removed their ownership and direct responsibility for their villages, but the Guyana Reparations Committee said a special law is needed for land rights and local governance.

Chairman of the International Decade for People of African Descent Assembly-Guyana (IDPADA-G), Vincent Alexander told a well-attended symposium on the “Village Movement” that the time has come to invoke the country’s constitutional provision for the establishment of village councils because the Neighbourhood Democratic Council (NDC) system has taken away villages.

“By virtue of that embedding, the people of those villages have lost control over their villages and more particularly over their lands and the lands are now subject to decisions by bodies called Neighbourhood Democratic Councils, many of which are alien to the people whose fore-parents purchased those lands and the people who still reside in those villages,” said Alexander, regarded in some circles as an expert on the local government system having been an academic in the field instructing in local government administration at the University of Guyana.

He explained that the NDC system has resulted in the control of lands being put in the hands of Indo-Guyanese through the NDCs that span several villages. “The problem is in terms of control. Those lands have gone out of the control of people of African descent because the village has now been located in a local authority that is dominated by people of Indian descent so the Council is not reflective of the village. It is reflective of a wide area that now makes decisions for a village which has things that are peculiar to that village so the system is discriminatory, it’s ill-conceived, it’s wrong in so many various ways and it is because of that wrongness that we are assembled here to see how we could address that wrong,” he said.

Alexander announced that, as part of the development of a strategic plan, countrywide consultations would include discussions on reverting to the village council system.

He noted that Guyana’s 1980 Constitution had provided for six tiers of local democracy—People’s Cooperative Units, Neighbourhood Councils, Community Councils, District Councils, sub-Regional Councils and Regional Councils—but by 1999 only the Municipal Neighbourhood Democratic Council and possibly Village Councils had been enshrined in law after a previously tabled legislation in 1990 that had never been debated or approved by the House of Assembly. Alexander said those six tiers had been expected to replace Village Councils, District Councils, Municipalities and Country Councils. 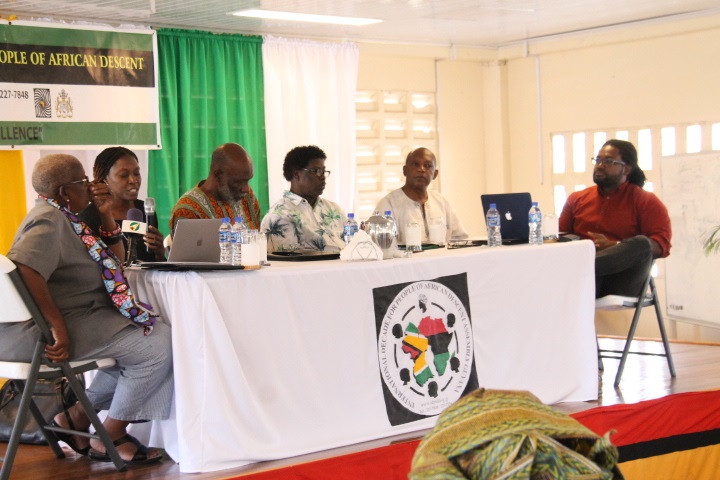 With the village councils having been replaced by the NDCs, the new body also took over the property rights and authority of villages. The IDPADA-G Chairman said the six-tier system had provided for villages to manage themselves if they had sufficient cash and other resources to do so.

“So you don’t give a local area everything to do just because (it) is a local (area) and you want to decentralise. You have to determine what can this local area do meaningfully because there are some services in local areas which are not localised or peculiar services,” Alexander said. He cited water supply through the East Demerara Water Conservancy because irrigation services are not provided by the village or primary schools that serve more than one village. On the other hand, he said the responsibility for lands should remain with villages.

Chairman of the Guyana Reparations Committee, Eric Phillips cautioned that if village councils were reestablished on the coastland under the Guyana Constitution, they would run into conflicts with then NDCs over land management. He said the solution is for 18 percent of Guyana to be allocated to Afro-Guyanese and setting up of a perpetual trust, in keeping with the draft Guyana Reparations Ancestral Rights Bill that he hoped would be dispatched to the Parliament. “I agree that village councils are critical for us but I think that a different strategic approach has to be taken if we are to achieve our goals,” he said.

He said Amerindians have more than 200 villages that are governed by Toshaos (village chiefs) in keeping with the 2006 Amerindian Act instead of the Guyana Constitution. Restating that Amerindians have already leveraged their political clout to 13.8 percent of Guyana and were seeking an additional 25 percent, he said it is clear Village Councils have been established while none has been done in Afro-Guyanese communities. “As much as the constitution states that village councils can be formed, we have been sleeping because others have formed them and others have gained the benefits of them,” he said.

Phillips said it all comes down to leadership, will and strategy to have village councils set up by having the right people with the right thinking to harness oil earnings from the Sovereign Wealth Fund for the development of a green economy. He lamented that Afro-Guyanese were not key players in the current economy and were not positioned to take advantage of the oil economy and political power. “It’s peripheral and it’s not going to get better because Guyana will now attract some of the top class firms in the world who will not only miniaturise our current private sector, much less ours, we don’t have one,” he said.

He appealed to Afro-Guyanese not to believe that they stood to benefit economically because their party was now in power. At the same time, he expressed concern that steps were not being taken to take advantage of Afro-Guyanese experts in government to craft a village-based plan. “We have all the people in Guyana who are African who can be abstracted and asked to come together to develop a strategic plan for African-Guyanese that is based on villages that are managed by village councils but yet we don’t have that,” he said.

Phillips, whose African Cultural and Development Association (ACDA), had strongly objected to the structure and representation of IDPADA-G, bemoaned the presence of “all sorts of structures, all sorts of leaders” but “not the right kind” who would align themselves with governments’ policies, programmes, Sovereign Wealth Fund and renewable energy sources. He also cited the need to leverage the churches, which is the largest block of African-Guyanese, by threatening the political leaders in the same way Amerindians do in the area of land acquisition.

The Reparations Committee, he said, presented government two plans in 2015 and 2016 including recommendations for African Business Councils in the 10 administrative regions, Village Movement Business Trust in each village, Village Credit Unions, and an African Think Tank for the 10 key sectors. “It is not that we don’t know what we need to do. We have enough brilliance in Guyana among our people to solve our problems but we are disunited and not well led,” he said.

Alexander hinted at the need for a “collective approach” by IDPADA-G and the Reparations Committee or a “mutual understanding of the differences” if they persist. He stressed that IDPADA-G  is a country coordinating mechanism for the United Nations-designated decade, 2015-2014. “We are working with your organisations. We are not an organisation that stands in competition with or to your organisations. Our role is to bring all together and to try to get the community to collectively move forward,” he said.

History Professor, Melissa Ifill recalled that by 1850, 12 years after full emancipation, African-Guyanese had bought a total of 16,840 acres of land on which 32,000 persons had been living. Issues that had dogged the villages for years had been unsatisfactory drainage and irrigation, sea defence, and road and bridge repairs, and discrimination in accessing loans and grants from banks and government.