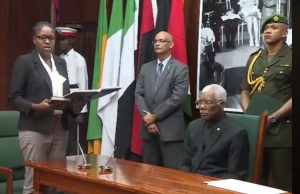 Newly-appointed Public Service Minister, Tabitha Sarabo-Halley says she plans to take the positions of her party, the Working People’s Alliance (WPA), to Cabinet and among her priorities is cash-transfers from oil revenues to the working poor.

She said, as WPA Chairperson, she would help to bridge the gap between her party and the coalition government of A Partnership for National Unity+Alliance For Change (APNU+AFC). “It will help with what has been sort of a disconnect between the party and the government,” Sarabo-Halley told Demerara Waves Online News.

Opting not to refer to whether the WPA’s views had been reflected adequately in Cabinet by her predecessor, Dr. Rupert Roopnaraine, Sarabo-Halley expressed confidence that she has “the ability” to be “the liaison between the two entities and to be able to respectfully put forward the party’s perspectives on policies and hopefully we’ll get Cabinet to go in the direction that we would like.”

The WPA Chairperson, who was sworn in as Public Service Minister by President David Granger on Thursday, hoped that she would be able to push for benefits to “the working class of this country”.

Sarabo-Halley said her priority issues would include pushing for cash transfers to sections of the working poor, a recommendation that Distinguished Economics Professor Clive Thomas floated last year. “One of the main issues that we have been advocating outside and will bring it to Cabinet is the issue of cash transfers. That is one of the issues that is pertinent and relevant at this time and we will be addressing it at the level of Cabinet as well,” the WPA Chairperson said.

The WPA, for its part, hoped that Sarabo-Halley’s membership of Cabinet would “greatly enhance relations between the WPA’s Executive and the Cabinet.” “For us, this marks a new and significant phase in our relations within the APNU, the Coalition and the Government. We are confident that her appointment will strengthen our collective efforts to prevail in the general and regional elections, whenever they are held,” the party said.

Since the APNU+AFC coalition won the May, 2015 general and regional elections, the WPA had complained publicly on several occasions that the People’s National Congress Reform-dominated APNU had not been meeting to craft policies and strategies as well as address concerns by the parties.

That party also hailed Dr. Roopnaraine’s contribution to the government and Guyana’s political landscape. “Even as we offer best wishes to our sister Tabitha, WPA also takes this opportunity to place on record our profound appreciation to Dr. Rupert Roopnaraine for his years of selfless service in advancing the interests of the people of Guyana and offer our continued support to him in keeping with his desire to serve the people of Guyana,” the WPA said.

Before she was nominated to replace Dr. Roopnaraine, Minister Sarabo-Halley was employed at the Ministry of the Presidency.

Roopnaraine, Carl Greenidge, Dominic Gaskin and Joseph Harmon resigned last month from their ministerial posts as well as from their role as lawmakers because the High Court and Court of Appeal ruled that it is unconstitutional for dual citizenship holders to be candidates or parliamentarians.