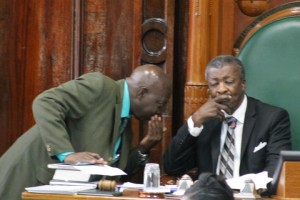 The Guyana Parliament will not convene on Thursday, and so far, on any other day because a required notice of six days has not been received, the Clerk of the 65-seat National Assembly, Sherlock Isaacs said Tuesday.

Minister of State, Joseph Harmon had said government had been contemplating holding a sitting on April 11 when all dual citizenship Members of Parliament (MPs) would be in attendance.

However, the Clerk of the National Assembly said no resignation was received from either the governing coalition or the opposition People’s Progressive Party Civic which has three dual citizenship MPs – Gail Teixeira, Odinga Lumumba and Adrian Anamayah.

On April 2, government had announced that President David Granger had accepted the resignations of Harmon, Foreign Minister Carl Greenidge, Minister of Business Dominic Gaskin and Minister of Public Service Dr. Rupert Roopnaraine. On the same day, government clarified that the resignations would take effect when the ministers submit them to House Speaker Dr. Barton Scotland.

The constitutionality of dual nationals in the House has come in for sharp focus after the High Court and Guyana Court of Appeal ruled that dual citizenship holders cannot run for elected office or be parliamentarians.

The State and private citizen Compton Reid had sought to challenge the validity of the no-confidence motion on the grounds that then defected government MP Charrandass Persaud, who had voted for the motion, is a Guyanese-Canadian.

The Court of Appeal ruled that the no-confidence vote was invalid because it required an absolute majority of 34 seats to secure its passage instead of 33.

The Caribbean Court of Justice, Guyana’s final court of appeal, is expected to receive arguments before handing down a decision later this year.

The Guyana Elections Commission has been made a party in the related cases.