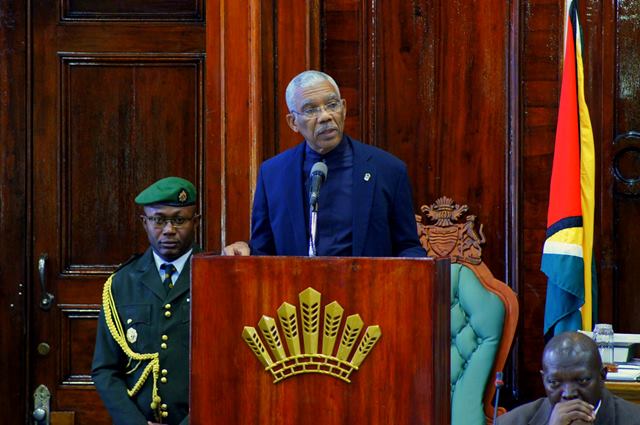 President David Granger on Friday cited the need for opposition support to aid him in setting a date for “credible” general elections at the “earliest possible date”, as the 90-day timeframe after the passage of the no-confidence motion expires next week Thursday.

“They demand political cooperation, not confrontation,” he said in a pre-recorded address to the nation, from the Ministry of the Presidency.

The President recognised the need for the National Assembly to extend the period within which general elections could be held after the expiration of the current period. “I expect that, with the advice of the Commission and with the support of the Opposition in the National Assembly, I shall be able to proclaim a date as early as possible for the conduct of General and Regional Elections,” the Guyanese leader said.

He noted that the 65-member National Assembly remains in session and constitutionally can be summoned to expand the time for conducting General and Regional Elections beyond the period of 90 days from the time of the no-confidence vote on 21st December, 2018.

Opposition Leader Bharrat Jagdeo has so far vowed not to agree to an extension of the life of the government beyond March 21, 2019. It is unclear what would be government’s next move if there is no compromise, but the President in his speech twice sought to assure Guyanese that their rights would not be violated.

“The Government of Guyana is committed to support the rule of law and respect for civil rights,” he said and later added that “I assure everyone that the Government will spare no effort to protect your fundamental rights and freedoms. Guyanese, I am confident that the path we have chosen is the best for the nation.”

He, however, slammed the opposition-nominated People’s Progressive Party’s (PPP)-nominated Guyana Elections Commissioners for frustrating the work of that elections management authority in arriving at a work plan and cost for holding the earliest possible credible general elections this year.  “Attempts at frustrating the Commission’s decision-making through walk-outs of meetings by Opposition-nominated Commissioners have been disruptive, dilatory and counterproductive to the agreement of a ‘work plan’ that could assure the nation of the Commission’s ability to hold credible elections within the shortest time possible,” he said.

Referring to a meeting he held with GECOM commissioners, the President said the government’s side got the impression that the existing voters’ list is inflated compared to the national population and so it needed to be sanitised. “It is (the) Commission’s responsibility to determine how efficiently and how quickly this could be achieved,” he said.

The governing APNU+AFC coalition and its three elections commissioners have been unrelenting in their call for house-to-house registration to be conducted to remove the names of deceased persons and emigrants.

Granger reiterated that GECOM must be allowed to function independently and he could not influence, interfere with or instruct the Commission in its work. “I am guided by its advice as to its readiness to conduct elections before I make a proclamation on the date of those elections,” he said.

The three coalition commissioners on Thursday said they voted for the next general elections to be held on the basis of a list to be produced by house-to-house registration. However, the three PPP commissioners said no such voting was taking place at the time they decided to walk out of the meeting.

In an apparent reference to Jagdeo’s call to party supporters to chase out the President, Prime Minister and government officials after March 21, 2019, the President urged Guyanese “not to be intimidated by incendiary insinuations aimed at instigating disaffection which could affect preparations for elections.”