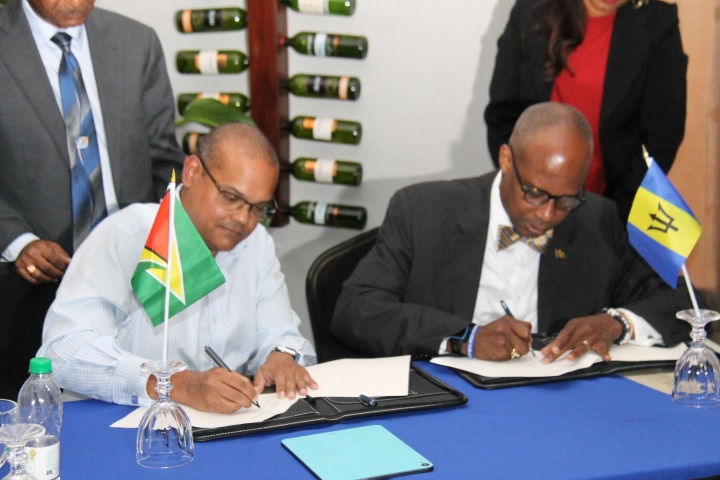 The Barbados and Guyana stock exchanges on Friday inked a memorandum of cooperation, paving the way for listed companies to trade in each other’s countries.

“The two key areas of interest identified in our preliminary discussions have been that of institutional strengthening and the cross listing of securities,” Managing Director of the Barbados Stock Exchange (BSE), Marlon Yarde said at the signing ceremony held at the Herdmanston Lodge in Georgetown.

Noting that cross-listing could help Guyana and Barbados cope with restricted or constricted market liquidity, Yarde said Barbadian investors were now better off searching for good investment opportunities. “The recent liberalization of interest rates within the commercial banking system in Barbados coupled with a recent debt restructuring program conducted by the Government of Barbados have left many investors seeking out new opportunities to, as we say at home, ‘turn a dollar’.”

Also announced at that event by Chairman of the Guyana Securities Council Nikhil Ramkarran was that the Guyana Association of Securities Companies and Intermediaries Inc. (GASCI) is already holding exploratory talks for a similar accord with the Eastern Caribbean Securities Exchange.

Yarde said the BSE was ready to advise GASCI on how to improve its systems and processes and possibly develop a new framework to move to the next stage. Specific areas in which the BSE boss said his organisation could assist GASCI include the establishment of a Central Securities Depository (CSD), and legal and regulatory reforms.

“We utilize a CSD system that is very efficient and functionally rich and would be more than willing to share related information and skill-sets with the GASCI should they be desirous in the pursuit of such an exercise,” he said.

In the area of legislative reform, Finance Minister Winston Jordan announced that steps were being taken to replace the 1998 Securities Industry Act that governs operations of the Guyana Securities Council, which regulates the capital market in Guyana. The idea of re-writing the existing laws stemmed from the need to ensure that the capital market operates in a fair and efficient manner, with minimum systemic risks and a high level of protection for investors. The
new law is consistent with international best practices, including the principles adopted by the International Organization of Securities Commissions and the CARICOM Model Securities Legislation,” he said.

Jordan added that a modern law would focus heavier on oversight and supervision, reduction of systemic risks and financial stability.

He said the draft bill and accompanying regulations have been with the Attorney General Chambers for final review, “for some time now” and he hoped they could be finalized and presented to the National Assembly for passage before the end of 2019.

The Finance Minister called on GASCI to bridge the financial literacy gap with the aim of stimulating greater public interest in buying shares that opt to reduce the risk of borrowing. There is no doubt that financially-literate businesses will choose to lower the cost of borrowing by issuing shares, and investors with a high level of financial literacy will diversify their investment portfolio by purchasing shares in profitable businesses,” he said.

Previous: President Granger calls for “political cooperation” to ensure “credible” elections this year
Next: Granger might remain in office out of “necessity” if no elections deal with Jagdeo, but contracts, orders will be questionable – panel