Granger might remain in office out of “necessity” if no elections deal with Jagdeo, but contracts, orders will be questionable – panel 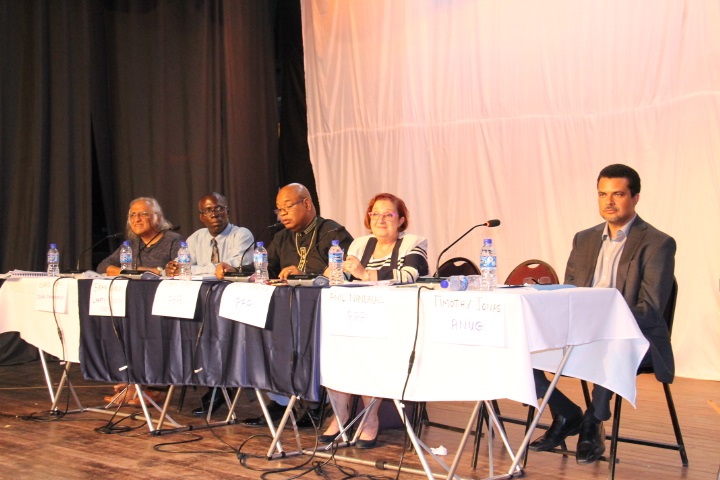 President David Granger and his government might remain in office as a matter of “necessity” if he does not first give into Opposition Leader Bharrat Jagdeo’s demands to name an election date first before the People’s Progressive Party’s (PPP) support to extend the 90-day time-frame within which Guyanese must go to the polls, officials said.

“The debate arises: what happens after the ninety days because there is nothing in expressed terms… After the ninety days elapse, you then are in a state of no man’s land where you have a government of necessity because they will continue to operate and the uncertainty then arises how we proceed from there,” Executive Member of A New and United Guyana (ANUG), Timothy Jonas told a town hall meeting organised by the non-governmental organisation, Reform, Inform, Sustain, Educate (RISE), at the Theatre Guild in Georgetown.

Political commentator Christopher Ram, who shared the panel, said if the Court rules that Granger’s term is extended beyond the 90 days, he would be usurping the post of the presidency. “He is a squatter, he is a usurper. De facto is if the court were to rule out of the doctrine of necessity that in the interest of continuity, protection of the security of the citizens,” he said.

Ram, along with fellow political commentator, Ramon Gaskin, also cited different sections of Guyana’s Constitution that empowers the military to perform governmental functions in certain circumstances. Gaskin said if the President becomes a “usurper” after March 21, Article 95 of the Constitution “kicks in” and the vacancy of the presidency has to be ultimately filled by the Chancellor of the Judiciary because the Cabinet, Prime Minister and all other ministers would no longer hold office. “Somebody has got to take responsibility for our State. We cannot sit down and let this happen,” he said. 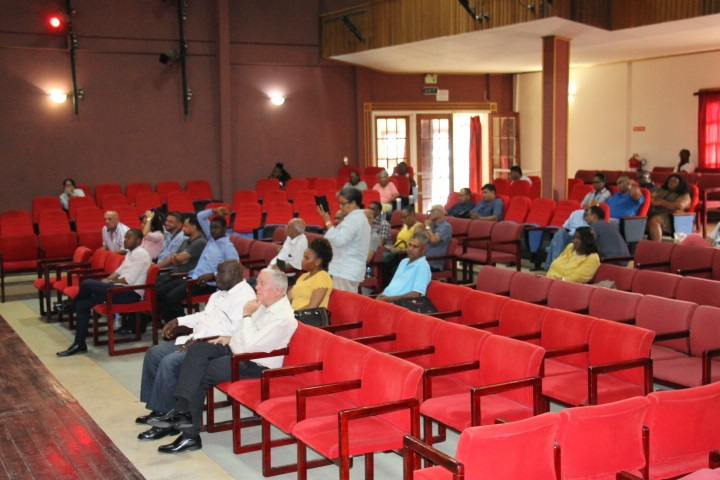 The sparsely attended town hall meeting, organised by RISE, on the constitutional implications of the no-confidence motion.

Gaskin opined that Article 197 of the Constitution authorises the Guyana Defence Force “the lawful, legal, constitutional authority to deal with this so-called crisis after the 21st” to intervene in the politics here “if there is not a normal functioning of the organs of the State.”

The Guyana Court of Appeal will soon rule on whether to uphold Chief Justice Roxane George-Wiltshire’s decision on January 31 that the no-confidence motion was validly passed on December 21, 2018 by a vote of 33 to 32.

Also pending is the State’s application for a conservatory order and stay of the High Court’s decision that the President and Cabinet stood resigned immediately after the motion was passed by the 65-seat National Assembly.

So the big question is: Can there be a parliamentary sitting and can the President, whose legitimacy might be questionable, dissolve Parliament and name an election date? Teixeira, the Opposition PPP Chief Whip, described the state of the President remaining in office “a grey area” and asked: how could Parliament be convened after March 21?

Teixeira personally believed that after March 21, the government will be unconstitutional and “therefore there should be no sitting of Parliament”. “This is strictly hypothetical that were the President to make a reasonable offer and were the Opposition to agree then, under those circumstances, there could be a mechanism found to be able to convene a special sitting for exclusively that purpose but it’s all in the area of hypothesis and speculation because as of today, March 16th, there is no indication of a date for elections,” she said.

Jonas, an Attorney-at-law, said there would be uncertainty over the legality of contracts that would be awarded for internationally-funded projects, issuance of executive orders and the passage of legislation. “We are in an area of uncertainty and uncertainty is a crisis,” he said.

Teixeira said political uncertainty would affect the business community and ultimately result in increased cost of living. She said government and the Guyana Elections Commission (GECOM) conspired to allow the incumbent administration to remain in office as close as possible to when its five-year-term expires in 2020.

The Opposition Chief Whip said house-to-house registration was not required by law, but the major problem is that there are no legal provisions to remove the names of deceased persons without death certificates. On the concern that the voters’ list is also bloated with the names of emigrants, Teixeira said the law does not prohibit them from being on the voters’ roll because, as Guyanese, once they are in Guyana at election time they should be allowed to vote.

To allay fears that persons would vote under the names of deceased persons or emigrants, she said Opposition Leader Bharrat Jagdeo and his delegation held out an “olive branch” to the President and his team that the PPP would support the approval of more monies to pay more polling agents and party scrutineers to “enhance scrutiny” at polling stations countrywide.

The PPP Executive Member questioned how is it that the same list was used to hold free and fair Local Government Elections on November 12, 2018. She contended that the APNU+AFC coalition had always planned to delay the elections even if they were to be held in 2020 by citing the need for house-to-house registration. Teixeira recalled that the Finance Minister had cut GECOM’s budget in 2016 and had ruled out allocating more monies to conduct house-to-house registration in that year.

With the voters’ list now set to expire on April 30, Teixeira said the electors’ roll should have been updated in January or February 2019 in the absence of a no-confidence motion.

Former rice miller, Dr. Turhane Doerga urged the town hall gathering to mobilise civil society and political parties to put pressure on Granger by collectively sending him a symbolic letter of dismissal. “Maybe we are afraid to talk about civil unrest but I don’t see any other way to do it. Come March 21 and the government doesn’t pack up, let us send him the letter – ‘thank you very much; when are you leaving?’ – let civil society start to sign that online or wherever and let us take it in a whole grouping and ask him ‘when are you leaving?’,”

The People’s National Congress Reform, and A Partnership for National Unity and the Alliance For Change did not field representatives at the forum, although organisers said they were invited.

Previous: Barbados, Guyana stock exchanges agree to cooperate; new stock exchange legislation in the pipeline
Next: OPINION: Naming an elections date – who is who and what is what