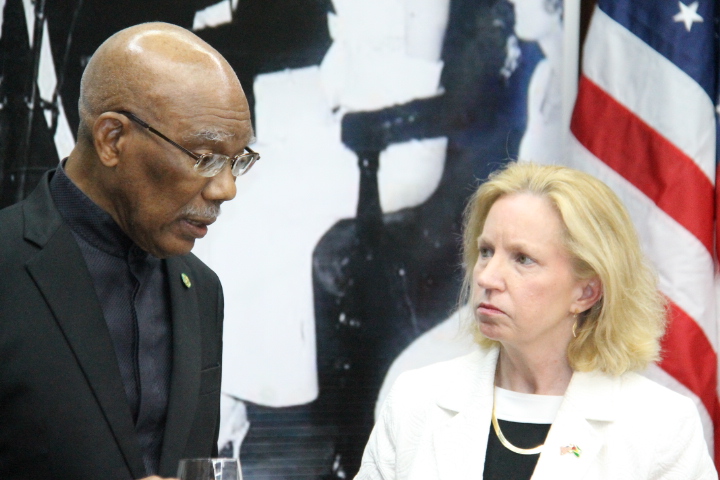 Newly-appointed United States (US) Ambassador to Guyana, Sarah-Ann Lynch on Wednesday said the US would back free and fair general and regional elections.

“Moving forward, we will continue to encourage genuinely free and fair elections, freedom of speech and assembly, multiparty representation and a constitutional judiciary process,” she said immediately after presenting her credentials to President David Granger.

Ambassador Lynch’s remarks come at a time when President Granger has already urged the Guyana Elections Commission (GECOM) to prepare for the conduct of General and Regional Elections this year. However, the President has made it clear that he needs GECOM to properly advise him about its readiness before he can name an election date.

With 11 days to go before the 90-day time-frame within which general elections should be held following the National Assembly’s passage of a no-confidence motion in December, Opposition Leader Bharrat Jagdeo appears steadfast in his position to not agreeing to extend the life of the government unless the President names an election date.

At GECOM, there is deep division between the three opposition elections commissioners on the one hand, and the three coalition commissioners and the chairman over whether the current voters’ list, set to expire next monthend, should be used or move to refresh the list with house to house registration because the existing list is “bloated”.

President Granger, in his response to Ambassador Lynch’s remarks, reiterated that the US adhere to the principle of non-interference in Guyana’s affairs. “Our relations are founded on mutual respect for each other’s territorial integrity and sovereignty, mutual non-interference in each other’s internal affairs, cooperation to our mutual benefit, respect for treaties and international law and the maintenance of regional peace and security,” Granger said.

US President Donald Trump last month said his country recognizes and honors Guyana’s respect for the principles and integrity of democratic governance and institutions.

Already, Britain, the European Union and the United Nations Resident Coordinator have all expressed the hope that Guyana abide by its constitution.

The US envoy, who succeeds Perry Holloway, also appeared to refer to Guyana’s significant oil reserves and expected huge inflows of revenues in saying that this South American nation is poised to becoming a regional leader. “Guyana is embarking upon a time of significant transition and growth and I am excited to be in Guyana for this moment in history. Your nation is poised to become a regional leader with unprecedented opportunity,” Lynch said.

The US Ambassador reiterated her country’s expectation that Guyana would use its resources to invest in infrastructure, increase bilateral trade, diversify the economy and strengthen social services. “At this moment of incredible potential, we must continue to rely on each other,” she said.

Ambassador Lynch most recently served as the Acting Assistant Administrator for the US Aid for International Development’s (USAID) Bureau for Latin America and the Caribbean (LAC). She has also served as the Senior Deputy Assistant Administrator for LAC, USAID Mission Director in Iraq, and the Director of the Office of Iraq and Arabian Peninsula Affairs in USAID’s Middle East Bureau.

Ms. Lynch has been with USAID since 1993, and served in Bangladesh, Peru, Afghanistan and Iraq.

Ms. Lynch earned her B.A. from Mount Holyoke College in 1982, and an M.A.L.D. degree from The Fletcher School of Law and Diplomacy, Tufts University, in 1988. She also received an M.S. from the National War College in 2011.