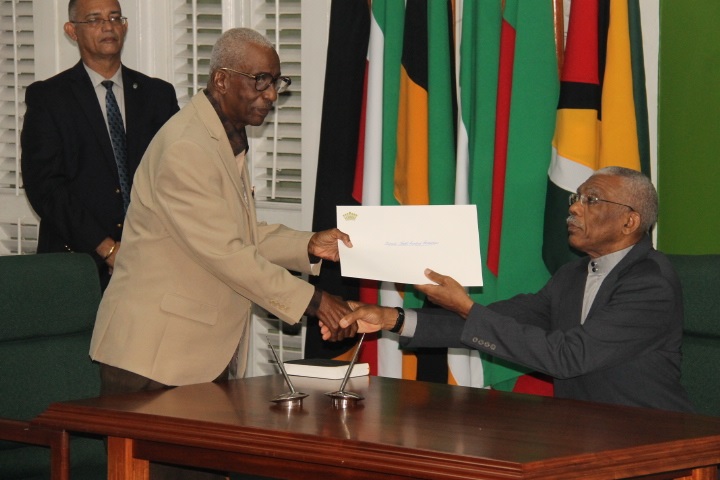 President David Granger Wednesday wrote to Chairman of the Guyana Elections Commission (GECOM) Justice (Ret’d) James Patterson requesting that the Commission present him with a work programme in the shortest possible time.

In his missive to Justice Patterson, the President noted it is essential that he is informed of the Commission’s readiness to deliver credible elections in Guyana.

“I urge you to present your plans, programmes and financial needs which will guide my proclamation of a suitable date for elections,” the Head of State said in his correspondence to Justice Patterson, as quoted in a  Ministry of the Presidency statement.

Granger’s call comes as March 21 – the 90-day timeline since the Government fell into no-confidence on December 21 – nears and there is a deadlock on extending the life of the government beyond that date unless he gives into Opposition Leader Bharrat Jagdeo’s demand that a date is named.

Since the passage of the no confidence motion against the Government, President Granger has twice consulted with Opposition Leader Bharrat Jagdeo. He also consulted the Chairman and Commissioners of GECOM.

The Head of State has emphasised that the Government of Guyana will not interfere or intrude in the work of the Commission.

Last week, the President invited the Commission to a meeting to discuss issues related to the hosting of General and Regional Elections this year.

He maintained that “the Commission is independent. It is not for anybody to give the Commission instructions as to when elections are to be held. Once the Commission says it is ready, I will announce a date and I hope that date is as early as possible.”

Article 62 of the Constitution of Guyana states that “Elections shall be independently supervised by the Election [s] Commission in accordance with the provisions of Article 162.”

Article 161 A (1) says “the Elections Commission shall be responsible for the efficient functioning of the Secretariat of the Commission, which shall comprise the officers and employees of the Commission, and for the appointment of all the staff to the offices thereof inclusive of all temporary staff, recruited for the purposes of boundary demarcation, registration or persons and elections and shall have the power to remove and exercise disciplinary control over such staff.”

Moreover, Article 162 (1) of the Constitution speaks to the Commission having functions connected with or relating to the registration of electors or the conduct of elections as are conferred upon it by or under the Constitution, or subject to any Act of Parliament, and to the provisions of the Constitution, the Commission “shall exercise general direction and supervision over the registration of electors and the administrative conduct of all elections of members of the National Assembly and shall issue such instructions and take such action as appear to it necessary or expedient to ensure impartiality, fairness and compliance with the provisions of this Constitution or any Act of Parliament on the part of persons exercising powers or performing duties connected with or relating to the matters aforesaid.”