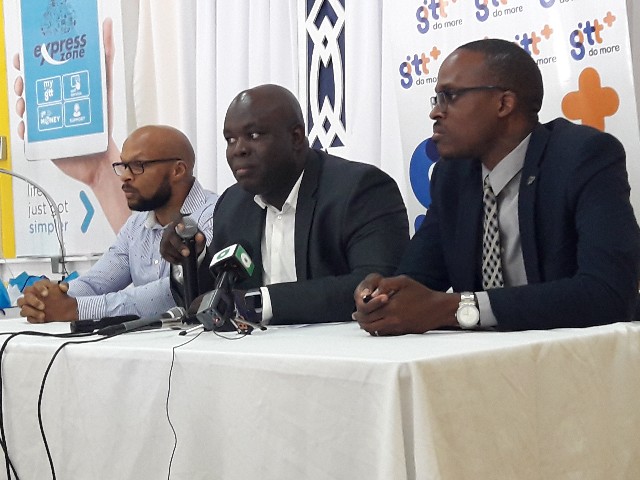 The Chief Executive Officer of the Guyana Telephone and Telegraph company (GTT), Justin Nedd on Tuesday avoided questions about the cause of the Blaze  high-speed data billing problem, and the number of landline services.

“You have no respect for people” was Nedd’s reaction in the presence of two other senior company officials when Demerara Waves Online News took advantage of an invitation to seek clarifications after a news conference. He was asked what had caused the billing problem with the Blaze service.

The CEO of the American majority-owned company promptly said the press conference was over and when he was reminded that the Public Relations Officer had informed the media that they could have engaged in one-on-one interactions afterwards, Nedd said “she made a mistake”. When asked why he always avoided questions, he denied and blurted “you have no respect for people”.

He earlier told the news conference that the problem was fixed, while at the same time stating that the customers have a right to pay for services provided. “We communicated well and we managed to get our hands around the issue with the billing. I’d be the first to admit not perfect. The billing was a bit delayed and I want to emphasise, though, if you look at the PUC (Public Utilities Commission) Act, if you look at our agreement, if you look at any accounting standard, there is a fair expectation that the person rendering the service wants to be paid so I do understand the bill shock, as they call it in the industry and I do understand the cash-flow implication of getting multiple months’ service in once but we did render the service and I want to say that we worked with the customers for the most part to rectify that situation,” he said.

During the news conference, Nedd also avoided providing details to the privately-owned Stabroek News newspaper about the number of new landline services that were provided last year and how many are planned for this year as well as backlog applications. When he was told that he did not respond to the questions, Nedd repeated that “people are giving up their landline services so every time we roll out a Blaze connection, it has a voice service.”

The GTT CEO said over the last year the telecommunications company rolled out 20,000 voice services.

The moderator then stopped the reporter from persisting with his line of questioning.

Nedd later virtually conceded that GTT was phasing out its copper landline services in favour of fibre optic connections through which value-added services such as a third-party video TV box service were being offered. “The fibre is better and we are not the first company in the world to do this. We are not the second, third, tenth, a hundredth company in the world to do it. If we stay with copper, will we make money?,” he said.