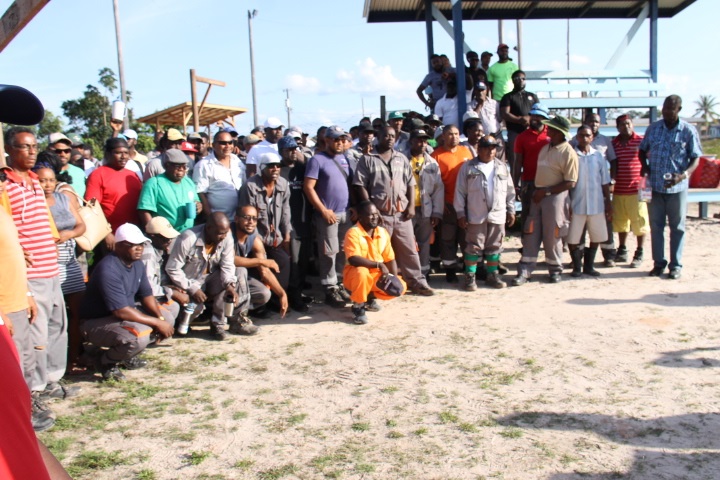 The Russian Aluminium (RUSAL)-controlled Bauxite Company of Guyana Inc. (BCGI) has sent home 30 more workers and said they would be paid, while those who remain on strike and are obstructing and threatening others who are going to work will not be rehired.

Senior RUSAL officials also told Ministers of Labour, Amna Ally and Keith Scott,  and Chief Labour Officer, Charles Ogle that they have begun disassembling three heavy duty trucks for exporting them to another unknown country and would also be loosening other mining equipment should they decide to close their operations in Guyana.

“From Monday, BCGI started disassembling three heavy trucks to be exported to another country. Enterprise is also scheduled to disassembling other mining equipment if mining activities won’t resume,” the Russian officials said. They added that after the equipment is loosening into smaller pieces the workers’ services would be terminated and they would be paid all dues in keeping with Guyana’s labour laws. “Operators of mining equipment to be disassembled would be dismissed with full pay in keeping with Guyana’s labour laws,” the officials said.

The company officials declined to discuss the points contained in a correspondence from their headquarters in Russia, but entertained concerns raised by the Guyana government officials.

The government ministers were told that RUSAL would be willing to sign new contracts with workers who did not participate in the massive breach, did not instigate or were not seen threatening loyal workers or prevented others from working. “Instigators and others won’t be admitted back to the enterprise”, the RUSAL official said, adding that those who want to work again would have to make a request in writing and each would be considered individually.

Ally, Scott and Ogle were informed that on average RUSAL’s 520 workers are paid an estimated US$1,235 per month.

RUSAL-BCGI called on the Guyana government to provide support to the company’s security service to deal with instances of damage to equipment and the personal effects of workers who were still on the job.

Minister Ally, in her reaction that she hoped the RUSAL officials would communicate to their superiors in Moscow, slammed the company for the way it was treating Guyanese workers. “I believe RUSAL management is unreasonable. It is unthinkable for the positions that you have taken on this issue. It is very clear that you do not want an amicable solution to this matter because you have put on the table issues, through us to the Guyana government, which says ‘take it or leave it’,” she said.

The RUSAL officials interrupted Ally, urging her to check documents before taking positions.

Ally objected to the RUSAL officials for describing a number of persons as instigators and questioned whether the Guyana Bauxite and General Workers Union (GB&GWU) was in fact responsible for fomenting unrest. She questioned why RUSAL-BCGI wanted to punish the workers instead of rehiring them and settling the dispute.

The senior Labour Minister also railed against the company for disassembling its vehicles and equipment and requesting new workers. She did not take lightly the company officials raising points about examining the future of the company. She also said the Guyana government would be examining the future of RUSAL-BCGI. “I can tell you for sure, we definitely have to look at the future of the company because this is unacceptable. It is not right for workers to be punished in this respect. I must say to you that the Government of Guyana would be going to the lengths to examine this issue with regards to operations, with regards to operations at this company,” she said.

She vowed that the Guyana government would not be tolerating the arbitrary treatment of workers without consultation or discussion. “Because you are management, you come here and you just decide that this is what you want and this is what you get. No, the Government of Guyana will not accept that!” she declared.

The government, she said, is obliged to protecting the rights of the company and the workers.

She accused the company of being “spurred on by some other force” outside the ambit of the management and workers. “I do not know if it is anything political and I hope not,” she said.

Junior Minister, Keith Scott said the Guyana government recognises the GB&GWU as the legitimate bargaining agent and no negotiations could take place behind the union’s back. He stressed that the government’s non-negotiable position was that the workers must be reinstated even if it meant the company disassembling itself. “We will not take one inch back from the reinstatement of the workers and, come what may, if you want to disassemble not only the trucks but the entire RUSAL, it’s quite okay because our workers are paramount,” Scott said.

The GB&GWU described RUSAL-BCGI’s posture as “an affront.” “This non-response is not to be ignored for it demonstrates clear disregard for the Government and Guyanese who are hosting them and whose laws, protocols and conventions they are expected to respect,” the union said.

The union said some of the workers began receiving letters dated 20th February, via the mail stating inter alia that, “Management has found it necessary to close sections of its operation and to lay off some employees.”

The lay-off along with the 61 workers dismissed earlier means the number of workers being victimised is climbing, the union said.

“The struggle with the Russian management is taking on an ugly and most dangerous turn that is the first of its nature experienced in the history of Guyana. This is clearly not just an industrial struggle it is a political struggle of a nature that requires a strong united front of all political parties, the business community, stakeholders and people of Guyana. We would have done this against Venezuela and RUSAL’s actions is a demonstration of no less aggression by hostile and greedy border forces over the years. The actions of the Russian management violates our country in every way and must be seen as an act of declaring war against the working class and all Guyanese.

Something is palpably wrong when this Russian foreign company feels that it can violate our sovereignty with such impunity. Something is wrong when Guyana faces such serious internal threats to our sovereignty and the Opposition remains silent. The Opposition’s silence is even more notable given continuous raised voice about elections and matters relating to same. Its silence on RUSAL’s violation could be seen as lending validation to attacks on the nation’s sovereignty and its people. It is time for Guyanese, all forces, to unite against this foreign internal threat,” the GB&GWU said.

Previous: “You have no respect for people” – GTT’s Chief Executive Officer says when asked about Blaze billing problem
Next: President pledges cash, “sufficient time” for GECOM to hold “credible elections”