WPA is “not dead”, “young people can and should join”- Chairwoman 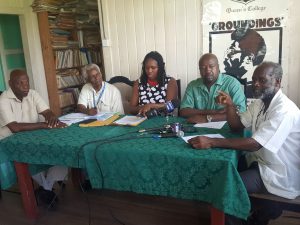 The Chairwoman of the Working People’s Alliance (WPA), Tabitha Sarabo-Halley has rejected claims in several circles that her political party is non-existent, but instead she has issued a call for youths to join that once vibrant organisation.

“We are not dead but we have a different way in going about things,” the US-trained Political Scientist said in a recent interview.

Unlike the WPA’s mass-based, multi-racial appeal in the 1970s and 1980s before its leader, Dr. Walter Rodney, was assassinated in a walkie-talkie bomb blast, the party has been unable to muster more than two parliamentary seats on its own.

But Sarabo said the WPA’s approach is vastly different in advocating its political policies and ideology, preferring to give members and supporters their space and flexibility to act independently but in the collective best interest of the society.

The former University of Guyana Political Science lecturer stressed that her party “has the space and the capacity for young people”. “I think the WPA has the ability and can be the party that young people should and can join and see their vision and their perspective and their views on what the country should look like; that can happen through the WPA. It allows for that,” said the 30-year-old Sarabo-Halley.

The WPA chairperson acknowledged that her party is regarded as an “intellectual party” but she was quick to point out that her organisation is “not in politics for politics sake”. The WPA’s focus, she added, was aimed at bringing substance to the table in moving Guyana forward based on the involvement of ordinary Guyanese.

Referring to critics who believe that executive members Tacuma Ogunseye and Political Science Professor David Hinds can say whatever they want, she said the WPA’s culture allows independent views and thoughts. That feature, she believed, should be attractive to young people. Sarabo-Halley urged youths who are interested in politics, not to be impatient if they do not reap successes or achievements in the short-term, but should understand that politics is a process.

“I would hope that young people would come to recognise that if it is that they want to get involved in this process that it must be a long-term thing and it’s not a short-term to get a position or expecting that the stars and the moon and everything that they desire will happen in two or three years and if it is that you realise that, then WPA is the place for you to be,” Sarabo-Halley said.

All of the political parties have been targeting the youth segment of the population for votes because more than 75 percent of Guyana’s population is between 18 and 35 years old.

The WPA is a member of the umbrella a Partnership for National Unity (APNU) whose major partner is the People’s National Congress Reform (PNCR). The WPA has in recent years toned down its criticism of the PNCR as having been responsible for the killing of its founder-leader, Dr. Rodney.

Previous: OPINION: After all the preening, the table of conversing it has to be
Next: Doing business with China requires tight, transparent rules – US War College Professor