PPP Leader and General Secretary Bharrat Jagdeo announced Thursday he was awaiting some legal opinions noting that “I’ve not explored it in great deal to see… its likelihood of success, whether you can go on dereliction of duty.”

Jagdeo said he would not be begging President David Granger for a meeting because it is the Guyanese leader’s responsibility to avert a constitutional crisis of his own making.

“I’m not setting myself up for a meeting that doesn’t mean anything,” Jagdeo said.

He said the Guyana Elections Commission (GECOM) was in “breach” of its statutory responsibilities for political reasons. “We will not sit idly by and allow GECOM to subvert the constitution to its will,” he said. The Commission on Tuesday, by a majority vote, decided that elections could not be held by March 2019 and they would go ahead with house-to-house registration which could take nine months.

He stated categorically that “at this point in time” the PPP’s 32 parliamentarians would not be voting to extend the elections deadline beyond 90 days since the no-confidence motion was passed last December. “We are heading to a constitutional crisis because of the Granger Government and GECOM,” he added.

He said the PPP would be waging a diplomatic war against government and a section of the Guyana Elections Commission by dispatching a team to international capitals to call for personal sanctions such as freezing bank accounts and prohibition of personal travel.

Jagdeo charged that the seven-member elections commission has become a tool of the People’s National Congress Reform, the major coalition partner in A Partnership for National Unity (APNU). He reasoned that the PNC was dominating the elections management authority with President Granger’s unilateral appointment of its chairman, Retired Justice James Patterson. “We believe that they have received clear direction from APNU – the government side,” he said. 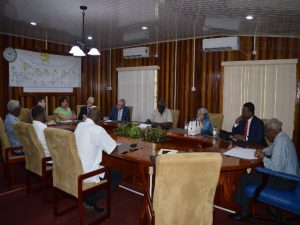 Today’s 10:00 am meeting in the GECOM boardroom at the request of the diplomatic delegation to meet with the Commissioners to discuss the agency’s preparations for the conduct of General and Regional Elections. (GECOM photo)

Pro-PPP Commissioner, Sase Gunraj and his pro-coalition counterpart, Vincent Alexander confirmed that the diplomats sought answers to a number of questions, but made no commitments. They said one of the diplomats pointed out that the stalemate was impacting negatively on “inward investment”.

Previous: Solicitor General never resigned, still on the job – source
Next: Guyanese workers must be respected and labour laws upheld – Minister of State at RUSAL meeting