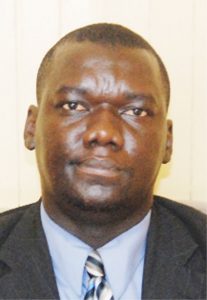 Guyana’s Solicitor General, Nigel Hawke has not resigned and is still very much at his desk, a well-placed source at the Attorney General’s Chambers said Thursday.

The source vehemently denied that Hawke even submitted a resignation to the Ministry of Legal Affairs Permanent Secretary but conceded there were “loud discussions” about what transpired at the Court of Appeal on Wednesday.

Hawke, a former Magistrate in Guyana who recently returned from Belize, played no role in preparing court papers to appeal a High Court decision on the no-confidence motion.

Appellate Court Judge, Rishi Persaud on Wednesday ordered Attorney General Basil Williams to correct mistakes in the court papers before the State’s applications for a stay of the High Court’s decision and a conservatory order could be considered.

Solicitor General Nigel Hawke is calling on the Stabroek Newspaper to issue an apology for its erroneous article which stated that he resigned with immediate effect on Wednesday following the Court Appeal matter regarding the no-confidence motion.

In the article titled ‘Solicitor General Resigns’ and published in the Thursday, February 21, 2019 edition, the newspaper stated that it was “reliably informed” of his resignation.

However, Mr. Hawke has stated that the report is misguided and far from the truth. He expressed his disappointment that the newspaper failed to adhere to the basic journalism ethics and standards of fact checking its information prior to publication.

The article, which Mr. Hawke believes was intended to create mischief, stated that: “Shortly after returning from court, he [Hawke] was locked in a closed door meeting with [Attorney General Basil] Williams for about 15 minutes. Reports are that the former magistrate who spent some time in Belize emerged from the building with his belongings and left the area in a taxi. A vehicle had been assigned to him.”

Mr. Hawke says that if the newspaper made an attempt to contact him or the Permanent Secretary of the Ministry of Legal Affairs it would have found out that he had not resigned and that the “belongings” seen with him were his usual bag of books.

Furthermore, he left the building in a taxi with his brother and it is not the first time that the vehicle assigned to him has been left at the office. Mr. Hawke regrets that the article, which went viral, has caused much trepidation to his family.

He also regrets that there was some form of linkage drawn to the issues which arose on Wednesday during the appeal challenging the ruling of the High Court in the no-confidence motion cases.

Mr. Hawke was not involved in the filing of these matters in the court of appeal. He is calling on the newspaper to issue a public apology and recant the article or he will be caused to seek legal advice.