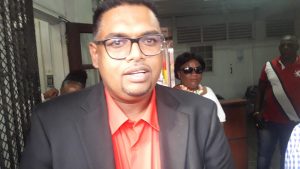 People’s Progressive Party/Civic (PPP/C) presidential candidate, Irfaan Ali, who has been charged with a total of GYD$174 million in land sales fraud, has been blocked from travelling to Canada, he said Wednesday.

Ali had been scheduled to leave Guyana on Tuesday for a series of meetings in Toronto, but one day before his departure, he said the Canadian High Commission in Trinidad informed him that due to the charges he is facing in court, he could not travel.

“On Monday, January 28, 2019, at 4:05 pm, I received a correspondence from the High Commission of Canada, Port of Spain, Trinidad and Tobago, advising me of a report in relation to the 19 trumped-up charges by SOCU [Special Organised Crime Unit]. In the correspondence, they advised me not to travel and give 30 days to respond to the correspondence,” Ali said.

He provided no details about the letter from the Canadian High Commission or whether he would respond.

Saying that mischief was being peddled, Ali said contrary to social media reports, he has a valid passport and a valid Canadian visa.

Ali, however, said he has since contacted the Canadian High Commissioner in Guyana, who is looking into the matter.

“As I await the outcome, I assure all Guyanese in the Diaspora of my utmost respect and regard for them. and the circumstances surrounding my travel to Canada at this time is beyond my control,” he said.

The High Court recently temporarily blocked the Magistrates Court from hearing the alleged fraud charges until Ali’s legal challenge to those charges is heard and determined.

After it had become very clear that PPP General Secretary Bharrat Jagdeo had been well on his way to securing Ali’s election as his party’s presidential candidate, information had surfaced challenging the authenticity of Ali’s academic qualifications.

2019-01-30
Denis Chabrol
Previous: GECOM Secretariat to advise Commission on general elections timeline
Next: 4 questioned in connection with School of the Nations threats