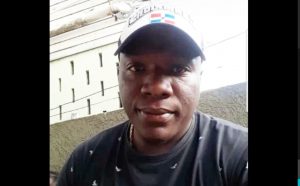 Two hospitalised men were arrested Wednesday for the gunning down a taxi driver on the East Bank Demerara Public Road as he was heading home with his wife and daughter, police said.

One of the men was arrested at the Woodlands Hospital where he turned up with severe injuries to one his legs after an injured Walters rammed the two men off their motorcycle. One of the suspects has been identified as 25 year old Devon Williams of Albouystown, Georgetown.

“The two suspects, one of whom was already positively identified, have been arrested and are under guards at a private medical institution. Both suffered injuries consistent with that of a motor vehicle accident,” the Guyana Police Force said.

“Investigations revealed that Walters was proceeding south along the eastern carriageway in his motor car PXX 1509 with his wife and child, and whilst in the vicinity of the Two Brothers Service Station, two males on a motorcycle approached and turned in front of his vehicle; during that said time, the pillion rider whipped out a handgun and shot the driver in his face.

The injured victim reactively struck down the suspects who fled the scene on foot, leaving behind their motorcycle and firearm with fourteen live rounds; the victim was rushed to the GPHC where he was pronounced dead on arrival,” the Guyana Police Force said.

Walters was a prime witness on the failed grenade attack outside Kaieteur News in November 2015. Williams is said to be connected to one of the three men – Leroy Williams, Alphie Garraway and Janeil Garraway – charged with that incident.