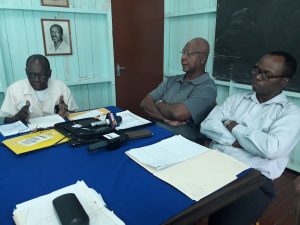 The Guyana Postal and Telecommunications Workers  Union (GPTWU) and phone company pensioners, several with more than 50 years of service, on Wednesday demanded that the Ministry of Finance publicly prove that they are receiving their correct pensions in keeping with their unbroken service.

GPTWU President Harold  Shepherd said the union and the pensioners’ association have given government one week to name the pensioners and the monthly pensions they are receiving after which lawyers would be consulted. “We are giving the Minister of Finance or I should say the Government of Guyana an opportunity once more to have dialogue with the union to address this issue. We are not prepared to wait indefinitely… We expect a call at least from some senior official within the next week or so for us to sit down and have dialogue on this issue,” he said.

The union and the pensioners restated their call for the government to stick to the provisions of the 1990 agreement between the Guyana government and Atlantic Tele-Network (ATN) that guarantees “continuous and unbroken” service for the workers who had opted to remain on the job when the Guyana Telecommunications Corporation (GTC) had been sold to ATN and became a new legal entity – Guyana Telephone and Telegraph Company (GTT).

For years, they had been receiving the minimum government pension of just over GYD$20,000 instead of as little as GYD$90,000 or as much as GYD$700,000 depending on their last salaries at the time of retirement. While the Finance Ministry had adjusted their pensions in 2017 based on current similar positions at GTT, the pensioners maintained that was insufficient.

Several of the pensioners justified their position that they were being “robbed” of their correct pensions because the Ministry of Finance had been informing them that they had retired in 1990 while they had been paying income tax and social security and had been issued retirement letters by GTT. “No member, no pensioner can retire twice from one entity,” said former Assistant Engineer Lennox Skeete.

The pensioners association and the GPTWU also want the National Assembly to reactivate a promise to consider the retirees’ plight by taking their concerns to a special select committee. Such a committee, they said, must include government Minister Carl Greenidge and  former GTT Deputy General Manager, Godfrey Statia “because of their involvement with this pension issue some years ago”.

Retiree David Wallace challenged Minister of Finance Winston Jordan to publicly prove that the pensioners’ issue has been resolved, a claim he labelled “disrespectful, untrue and insult to the pensioners and the members of the public”. “If the Ministry feels or knows to themselves that they have done the correct thing, we will like them to put into the media the names of all of the pensioners from GTC/GTT who are receiving their rightful pension, the date they retired and how it is being computed; if it is in sync with the purchase agreement. Also, if they are saying that this matter is resolved, we will like them to put into the media the document that was sent to the union stating that this this has been rectified,” said Wallace.

Wallace said GTC/GTT pensioners are “suffering” after serving the telecommunications industry and by extension the security and business sectors for more than 50 years. “Some of those persons are deceased. Many of them, who are alive today, cannot even afford to pay their medical bills and there are some who are depending on their offspring to look after their welfare,” he said.

In apparent reference to arson in the sugar estate during industrial unrest, he said telecoms workers had never damaged cables or telephone exchanges during labour disputes with the phone company.

Back in 1990, workers had been told that their employment would have continued with GTT and their service would be treated as “continuous and unbroken and other conditions of service will not be less favourable than what you presently enjoy”, Wallace said.  At that juncture, the workers had been guaranteed 18 months’ employment unless management dismissed or discharged them for cause. They also had been informed that amounts due and payable to them would be made available when they retire from GTT or their employment with GTT is terminated in which they had been employed in the public service and would have been entitled to pension and gratuity under the Old Age Pensions Act.