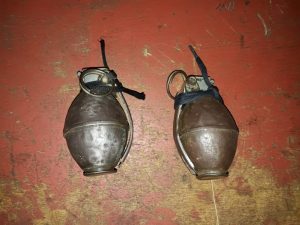 Three Venezuelans and two Guyanese were over the last two days arrested after grenades, a handgun, marijuana and ammunition were allegedly found in their possession, police said.

The Guyana Police Force said police and soldiers at Blackwater Creek, Cuyuni River during last Wednesday and Thursday, have arrested three Venezuelans and two Guyanese with the illegal items. 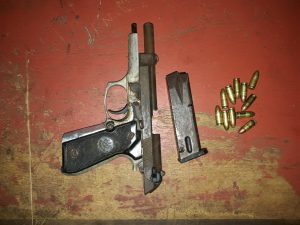 On Wednesday at about 1:30 pm, according to police, the Joint Services patrol intercepted a boat and conducted a search of its occupants and found in the possession of the 26 year-old Guyanese Captain of Eteringbang Landing, a live twelve gauge cartridge and 271 grams of cannabis.

At 3:30 pm Thursday the police and soldiers reportedly intercepted a boat at Mode Hole, Cuyuni River and found in possession of two of its 17 occupants, a live grenade, each.

Later at 5:30 pm Thursday police said another vessel was intercepted and one of the two occupants, who resides at Enterprise, East Coast Demerara was found in possession of an unlicensed pistol with 11 live matching rounds.

Again at 11:30 pm Thursday night the Joint Services patrol said they searched a boat at the Eteringbang Landing and found in possession of the 27 year old Venezuelan Captain, five live rounds.