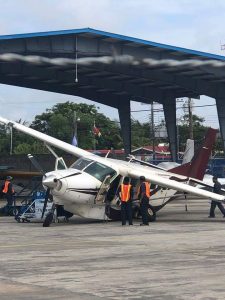 All caravan planes being operated out of the Eugene F. Correia ‘Ogle’ Airport by domestic airlines have been ordered grounded for inspections after one of their undercarriages collapsed, the Guyana Civil Aviation Authority (GCAA) said Thursday.

GCAA Director-General, Retired Lt. Col. Egbert Field said the “cease-fly operation” order for the 16 planes based at Ogle was issued after the left undercarriage of a caravan plane belonging to Air Services Limited (ASL) fell. “My inspectors are still conducting their investigations as to why,” he added.

“In the interest of safety and in order to ensure that all caravans are safe, I have ordered that they be grounded and their undercarriage be inspected because the one that collapsed was just stationary. It was not moving, not that it crashed into anything, it was just being loaded,” he added.

Field said inspectors of the several domestic airlines would  be checking the planes, including their maintenance records, and those would be verified randomly by GCAA inspectors. Once the all-clear is given, he said the cease-fly order would be lifted. “The CAA has to be informed when the inspection has been done so that we could release the aircraft for flights,” the GCAA official added.

Civil aviation inspectors were said to be combing through the maintenance programmes and manufacturers’ manuals to ensure there is safety. “In the interest of the flying public and in order to ensure minimum disruption to flights, we asked for the inspection before they can fly,” he said.

The domestic airlines, he added, would be required to conduct a number of follow-up actions.

The GCAA Director-General said among the likely causes could be corrosion leading to a hair-line crack or stress as a result of the “constant battering” on interior airstrips.