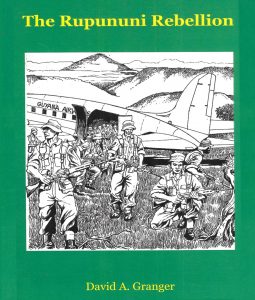 President David Granger has reissued his book, The Rupununi Rebellion to mark the 50th anniversary of the quelling of the Rupununi rebellion which broke out on January 2, 1969, less than three years after Guyana achieved Independence.

The President was serving as Adjutant of the 2nd Battalion of the Guyana Defence Force (GDF) which had operational responsibility for restoring peace at that time.

“Rebels led by a few rich families, had seized control of the region with arms supplied by a neighbouring country, murdered several policemen and attempted to secede from Guyana and establish an independent republic,” the Ministry of the Presidency recalled in a statement.

The ministry added that the rebellion was the result of a conspiracy not of indigenous peoples, but of a few related cattle-owning families who lived in huge haciendas. “They resisted the prospect of surrendering their ranches to the landless indigenous peoples in accordance with the Amerindian Lands Commission which had been established by the Government of the day and which was committed to the re-distribution of land,” the statement said.

According to the Ministry of the Presidency, “the rebels – belonging largely to the Melville-Hart clan – fled to Brazil and Venezuela where they were granted asylum.”