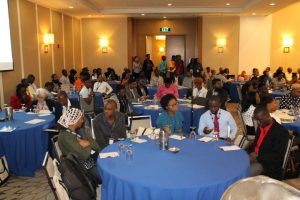 The Caribbean Community (CARICOM) Secretary General said the regional grouping is strapped for resources to engage youths, even as he appealed to parents to be the first line of attack against anti-social behaviour.

“This work is going to continue. I only wish I had more resources to be able to engage more with the youth in what we do. The only constraint I have is resource constraint, not one of a will to do so,” Irwin La Rocque told a Caribbean youth summit aimed at coming up with youth-driven ideas to combat crime and violence.

Noting that many ideas emerging from frank and open exchanges with youths are adopted, La Rocque said projects and programmes are valuable at the end of the day but that the family plays a critical role in the battle against crime and violence.

Addressing the opening of the Caribbean Summit on Youth Violence Prevention being held at the Marriott Hotel in Guyana, La Rocque stressed the important role of the family in reducing crime and violence and inculcating in youths that gangs, crime and violence are “not the answers to a path of success”. “The core of this battle must be fought in the home. Families have a vital role to play in turning the tide of this trouble. The universal values of love, hard work, honesty, character building, belief in self and self-respect are key weapons”, he stated.

“The first intervention must be in the home. It is there that our youth are first socialised. It is there that we must tackle the concept of toxic masculinity which comes out of a false notion of what it takes to be a man,” said La Rocque.

Figures, he said, show that the majority of victims and perpetrators of crimes are young males between 18 and 35 years old, and 80 percent of prosecuted crimes were committed by youths between 19 to 29 years old. He restated that high youth unemployment amounting to 25 percent in 2017 was responsible for the high rate of crime.  Unemployment is also said to be the highest – 33 percent – among young women from 18 to 30 years old.

The United Nations Children’s Fund’s Deputy Representative for the Eastern Caribbean, Muriel Mafico echoed the need for families to prevent violence in communities. “We have to invest in the family. We have to equip the families because that is where the social norms are established and that is where zero tolerance to violence is established and so the family becomes the centre of where the response has to start,” she said in a question and answer session.

Chief of the Caribbean Development Bank’s (CDB) Social Sector Division, Diedre Carrington, announced that the Barbados-based development financial institution would be developing its first youth policy and operational strategy which would be rolled out this year. “Youth mainstreaming and crime prevention will feature prominently. As a precursor to this strategy, we will be channeling greater investments into our youth innovation and empowerment programming and importantly building on the outcomes of the Caribbean forum on population, youth and development,” she said. That forum was held in Guyana in July 2018.