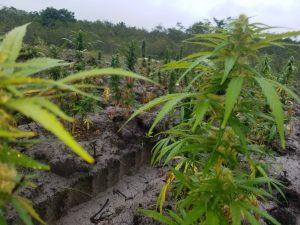 A day after the Liberty and Justice Party (LJP) promised to decriminalise cultivation of marijuana and hemp, Guyanese police announced in a statement they destroyed another marijuana farm.

The latest marijuana cultivation destruction also prompted criticism by a government spokesman in his personal capacity. “On the one hand small farmers in Jamaica are to begin profiting from marijuana cultivation while in our Dear beloved Republic the police (who are not to be blamed as they are executing their mandate based on the laws of the land) are destroying small ganja farms,” said Imran Khan, an executive member of the Alliance For Change (AFC).

The AFC’s proposed amendment to scrap custodial sentences for possession of small amounts of marijuana for personal use has been languishing in the National Assembly for more than three years without any movement.

LJP Leader, Lenox Shuman expressed concern at the official launch of his political party on Saturday about the failure of successive governments to decriminalise marijuana while at the same time packing up the country’s jails with persons who have been caught with small amounts of the plant. “We are busy clogging up the judicial system and I would say to a great extent supporting corruption by literally not legalising marijuana, by not legalising hemp, and the uses of hemp are tremendous. You can make houses out of hemp, you can fabricate boards out of hemp,” he said.

Shuman also noted that the government has refused to legalise the planting of hemp, a marijuana family plant, that is used to produce a number of consumer products. Shuman forecast that the next general elections would be held without the incumbent administration amending the laws. “I would bet that come election time again and to my friends in the Rastafarian community, and those of you who are not, I am going to tell you listen carefully because come election season you are going to hear all of these other parties come out there and talk about legalisation. But I want to ask you, in 53 years have they really been serious about that? Have they taken that step?’ I want to tell you that that is something we’re willing to take up,” said Shuman. He hailed moves by Suriname, several Caribbean island nations, European countries and Canada to legalise marijuana.

In an internal missive to other AFC executive members, that party’s leader Raphael Trotman recently urged that steps be taken to heighten advocacy on a number of issues such as the elimination of jail terms for possession of small amounts of ganja.

After Caribbean Community (CARICOM) leaders, including President David Granger, had last year received a report from the CARICOM Marijuana Commission, Trotman had announced that Guyana would have taken steps to amend the law. However, the amendment by AFC member, Michael Carrington, has not been considered by the House.

Guyanese Rastafarians and other pro-marijuana activists have been lobbying Caricom and the Guyana government to eliminate or soften penalties, citing no concrete evidence that marijuana use causes physical and mental illnesses.

The Guyana Police Force said lawmen on Saturday went to 8 Miles, Millie’s Hideout, Upper Demerara River and destroyed a two-acre marijuana farm of about 2,500 plants measuring one foot to four feet in height, with an estimated weight of 675 kilogrammes.

Also destroyed were several nurseries with about 3,000 plants, four makeshift camps with hammocks, a mattress , a quantity of kitchen utensils, groceries and about 200 kilogrammes of dried cannabis. Police said about seven miles away they destroyed another cultivation with about 1,500 cannabis plants measuring 2-5 feet in height with an estimated weight of about 225 kilogrammes. A nursery with about 1,500 plants and a makeshift camp with dried cannabis with an estimated weight of 100 kilogrammes was also found.

“The plants, camps, dried cannabis and the items were photographed and destroyed by fire; the locations were marked for further investigation. No one was found on the farms,” police said.