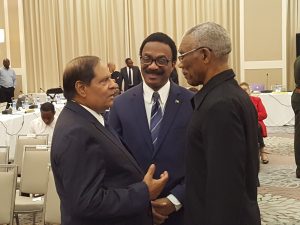 Attorney General Basil Williams has interpreted Guyana’s constitution as stating that an “absolute majority” of 34 votes are required to successfully pass a no-confidence motion against the Guyana Government.

“The Constitutional requirement for voting on a motion of no-confidence is distinct from voting on the passage of legislation and ordinary motions in Parliament. The framers of the Constitution by requiring the vote of a majority of all the elected members of the National Assembly have set the requirement as an absolute majority,” he states in the 12-page brief to House Speaker, Dr. Barton Scotland.

Government has been using its one-seat simple majority to pass laws, budgets and other types of motions.

The no-confidence motion sponsored by Opposition Leader Bharrat Jagdeo was passed on December 21, 2018 by 33 to 32 after then government lawmaker Charrandass Persaud broke ranks and voted with the opposition People’s Progressive Party (PPP),

However, international practice in several jurisdictions and the United Nations Security Council shows that the 50 percent plus one principle only applies to a simple majority.

In a prepared brief that explores options to settle the controversial no-confidence vote, Attorney-at-Law Nigel Hughes’ argument that 32.5 votes or 50 percent of the 65 seats must be rounded up to 33 and then an additional vote is required to take it to 34 votes. Hughes bases his arguments on two cases in Vanuatu and Anguilla.

A United States-based Political Science Professor, who, with a Mathematics Professor, co-authored material on voting theory in the context of simple and absolute majority, told Demerara Waves Online News that in the case of Guyana, an “absolute majority” means that government was defeated by the 33 votes that the PPP garnered after it scraped off one from the government’s benches.

“With that switch government would no longer have an absolute majority, nor a simple majority,” the Political Science Professor said. Professor in Mathematics at Florida International University (FIU), Julian Edward added that  “it seems clear to me the answer is absolute majority=33”.

The United Kingdom’s House of Commons, however, applies the 50 plus 1 simple majority rule to pass a no-confidence motion against the government.

In Malta, another Commonwealth member state, Law Professor, Dr. Austin Bencini  states that in his country’s Parliament an “absolute majority” of 35 of the 69 legislators is required to pass a no-confidence motion against the government despite the fact that half is exactly 34.5 persons.

Similar to Guyana is Timor-Leste where an absolute majority of (33 of the 65 seats) is required to pass a no-confidence motion in the Parliament.

At the United Nations General Assembly where there are 193 member states, 97 votes constitute an absolute majority although a precise half is 96.5 persons.

For government all is not lost because the Attorney General has cited other reasons in an effort to convince the House Speaker that he should reverse the ruling because “the requisite majority ought properly to have been 34”. Other reasons include the unconstitutionality of Persaud’s election as a member of the National Assembly because he is a Canadian citizen and his travel record shows that he used his Canadian passport to travel.

There are several government and opposition parliamentarians who have acquired citizenship of other countries.

Williams said there was also room to ask the Court to quash the count as unconstitutional, based on several cases in other countries. “The golden thread that runs through all the cases is once the Speaker acts in manner contrary to the constitution, the Courts are duty bound to void his decision,” he said.

The Attorney General said House Speaker Scotland made a mistake and, based on the briefing, he is asked to reverse his decision. “The quintessential fact is that there has been an error on the part of the speaker in ruling that the vote was carried. The ineluctable conclusion is that the vote was improper and unconstitutional. The Constitution’s ethos and norms must be maintained in order that the Parliament do not act or purport to act in a manner subversive to the Constitution,” he said.

Meanwhile, the PPP heaped criticism on the Attorney General’s briefing to the House Speaker, saying his arguments were baseless. “The “Legal Memorandum” constitutes an amalgam of misconceived and ill-conceived legal arguments and the citation of a host of case law authorities that are absolutely irrelevant to the propositions which they purport to support. In the circumstances, we reject this “Legal Memorandum” as vexatious, frivolous and wholly irrelevant. The Speaker is urged to do likewise,” the PPP said.

That opposition party said the House Speaker has no review powers and cautioned government against clinging on to power rather than call general elections by March 20, 2019. The PPP again noted that Prime Minister Moses Nagamootoo had after the vote on the no-confidence motion told the media that the next step would be general elections.