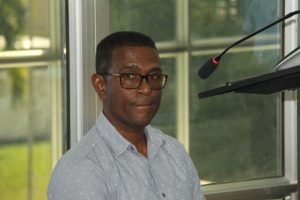 Amid claims that Town Clerk, Royston King allegedly leased a Lombard Street wharf that supposedly does not belong to the City Council, new information surfaced on Monday that two other entities are laying claim to the property.

He said he still uses the unfinished wharf to dock his vessels that shuttle cargo from Georgetown to the North West District, despite the controversy over who owns the land.

Under examination by his lawyer, Jerome Khan, the businessman said he signed a lease agreement with Town Clerk, Royston King on April 1, 2016 and paid GY$625,000 cash. Despite subsequent claims by the National Industrial and Commercial Investments Limited (NICIL), government’s holding company for state assets, and the Guyana National Industrial Corporation,  Sandy said he has already paid City Hall for 2017 and 2018.

Legal Assistant to the Inquiry, Sherwin Benjamin said a handwriting expert might be asked to examine the signature or initials of the cashier who collected the cash payment on each occasion from Sandy’s son. Sandy said he is not related in any way to the Town Clerk and that he never paid the City’s Chief administrator at any time.

Benjamin said he became alarmed when he observed that it was the same cashier’s name with different handwriting that purportedly transacted the payment with Sandy’s son on behalf of Quick Shipping Inc.

“There seemed to be some sort of irregularity and we may need a handwriting expert,” he said, adding that he was requesting that the documents be analysed given the vast variance in the signatures. “Something looks mischievous”, he remarked.
Khan said City Council’s records could be checked to ascertain whether the monies had been paid into the Treasury.

The businessman has been tasked with submitting financial records to show the “millions of dollars” he said he had spent on improving the wharf where pieces of old, pigs and piglets had been located. Works included clearing, back-filling, rehabilitating the wharf

Puzzled that one of the correspondence from the Guyana National Industrial Corporation’s Chief Executive Officer, Clinton Williams to the Head of NICIL, Horace James referred to both a lease and a transport for the same property, Inquiry Commission Chairman, Retired Chancellor of the Judiciary, Cecil Kennard stressed the importance of having the issue of the ownership of the land resolved.

“It has to be one or the other. It further confuses the issue of who are the real owners of this land,” Kennard said.

Responding in the affirmative to questions put to him by his lawyer, Sandy indicated that he was always of the view that the wharf was owned by the City administration because his research had shown that the facility had been previously leased to International Fishing Investment Company Limited for GY$250,000 annually until its expiration on July 8, 2006.

He testified that after NICIL officials visited him and told him that the government holding company owns the facility, he gave them a copy of the lease after which he received a letter from NICIL. Sandy said he then wrote James seeking NICIL’s permission to continue using the wharf and asked that consideration be given to him leasing the property if the City Council was not the owner.

By February, 2017 he said he received a letter from GNIC claiming ownership of the property.
The lawyer and his client also submitted that they were aware that Town Clerk King had written Minister of State, Joseph Harmon, who is a NICIL Board member, stating that the lease was granted.
The Commission of Inquiry Chairman has agreed to allow Sandy and his lawyer to return and possibly cross examine the NICIL and GNIC officials when they are subpoenaed.