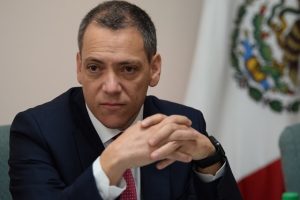 Mexico’s Agency for Safety, Energy and the Environment (ASEA) is sharing its industrial and safety and environmental regulations of the oil and gas industry based on its Risk Management Model, officials said.

Officials of ASEA, the main regulator of the Mexican oil industry, are facilitating a two and a half-day workshop on regulation of the oil and gas sector.

ASEA’s Executive Director, Carlos de Regules said,  with the management of over 300 oil platforms, six refineries above 60,000 kilometets of pipeline, over 100 oil and gas storage facilities and four years of experience in the sector, there is a lot Guyana can learn from.

Since commencing operations, de Regules said, 107 contracts have been awarded, US$200B committed for future investment and 74 companies from over 20 countries have visited Mexico to seek investment opportunities.

“Our lesson four years later is that regulatory certainty is a good deal for the industry. This is what we have found out and we have been working closely with different stakeholders to build these regulations,” he was quoted as saying by government’s Department of Public Information.

ASEA has worked with the United States, the United Kingdom, Norway, Canada and other major oil producing countries, and adopted many best practices.

Dr. Mark Bynoe, Head of the Department of Energy, described the exchange of information as timely as Guyana works to build capacity in terms of predictability and regulations in the emerging sector.

“It is important that as we go forward, while we cannot eradicate risks, we develop the framework in which it can be managed,” he pointed out.

Also delivering remarks was Head of the Department of Environment, Ndibi Schwiers, who noted that the workshop is important to building South-South cooperation and will enable Guyana to better understand the environmental safeguards and regulatory regime that Mexico has incorporated in advancing the industry, “even as we [Guyana] work towards developing our capacity to regulate and to monitor the sector.”

The workshop was declared open by Minister of Natural Resources, Raphael Trotman and remarks were also given by the newly appointed Head of the Environmental Protection Agency (EPA), Dr. Vincent Adams.

Some 35 participants from the Ministry of the Presidency, Ministry of Natural Resources, EPA, Department of Environment, Department of Energy, Guyana Geology and Mines Commission (GGMC), Guyana Lands and Survey Commission (GL&SC), the Maritime Administration Department (MARAD), the Guyana Oil Company (GUYOIL), Conservation International, University of Guyana (UG) and the private sector will take part in the sessions