Intruder caught by security service to be referred for psychiatric treatment 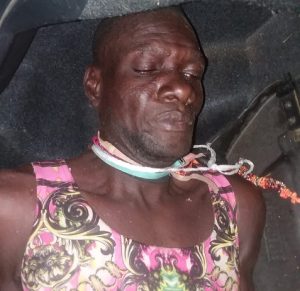 The man accused of illegally entering the home of Rajkumarie Singh at Uitvlugt, West Coast Demerara.

A knife-wielding man, who attempted to enter the home of a 66-year old woman at Uitvlugt, West Coast Demerara, was arrested and handed over to police, security and police said.

The West Demerara Police Divisional Commander, Senior Superintendent Rishi Das told Demerara Waves Online News that the man seemed to be of unsound mind and police would be seeking a court order to refer him to a medical institution for psychiatric treatment.

The Eccles, East Bank Demerara-based Delta Security Services said the woman alerted an emergency response team by pressing a panic button that was installed at her premises.

Guards responded to the emergency call and stayed with the woman on the phone until they arrived, arrested the man and took him to the Leonora Police Station.

The woman said the man is known to her as he previously committed a similar offence. She feared that he returned early Tuesday morning shortly after midnight to harm her.

” At around 00:12 am Delta Security received an alarm intrusion signal from client’s property and the Armed Response Team was dispatched. Suspect was seen on client’s veranda, and immediately ran when the Delta Response Vehicle approached the clients premises. The dedicated officers at Delta Security give chase and apprehended the suspect who was immediately taken to the Leonora Police Station,” the security company said.

The West Demerara Divisional Commander said the man was not responding to questions from investigators.