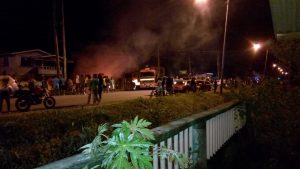 The scene of the fire at Sister’s Village, West Bank Demerara on Wednesday night, September 5, 2018.

Sources said three children- ages seven, six and four years- who were left at home without supervision, were playing with a lighter and subsequently a fight ensued over the lighter.

Investigations revealed that during the fight the eldest child accidentally set fire to the bed which quickly spread throughout the wooden house located at 250 Sister’s Village Public Road, West Bank Demerara. A neighbouring house was also damaged.

Sources said the children are usually left at home alone at the house owned by Wilfred Duncan.

The Guyana Fire Service responded promptly to the fire call.