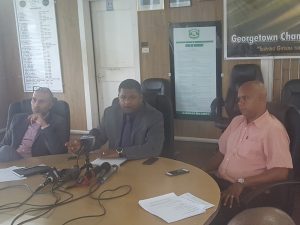 The Georgetown Chamber of Commerce and Industry (GCCI), fearful that Trinidad and Tobago companies were about to take over Guyana’s emerging oil and gas sector, has dispatched draft local content legislation that, among other things, seek to redefine what is a Guyanese company.

GCCI President, Deodat Indar said if the draft local content legislation-which has been dispatched to government and the opposition- becomes law it will require Guyanese companies to have 51 percent ownership, the holding of board meetings in Guyana, 70 percent of the staff must be Guyanese and its head office must be located in Guyana.

Lamenting that since 2015 when oil was discovered in Guyana for the first time government has failed to enact local content legislation or finalise the local content policy, Indar said of the GCCI’s 220 members at least 60 to 100 of them have submitted expressions of interest “but have not gotten back any word”.

Concerns about the absence of a local content policy or local content legislation were raised at a time when word has surfaced that Guyana, and Trinidad and Tobago would later this month sign a memorandum of understanding.  The GCCI appealed to the Guyana government to suspend the inking of that accord until the private sector is involved and considers its implications to avoid a “floodgate”. “We don’t have a policy, we don’t have any legislation for local content but yet we are going and do these MoUs, I think that they should wait. I’m asking government to hold on this. Let the private sector see what the verbiage is in this so that we would know it would not be adverse to us,” he said.

GCCI Senior Vice President chairman of the petroleum, Nicholas Boyer warned that in the absence of “a very strong” local content policy and legislation could result in companies skipping joint ventures and partnerships with Guyanese companies and instead be part of the supply chain. Joint ventures and partnerships, he explained, allow for transfer of technology, information and the growth of capacity in Guyana.

Boyer said recent signals from media reports in Trinidad and Tobago were that efforts afoot to take advantage of opportunities in Guyana’s oil industry for the benefit of that once oil-rich twin-island nation. “You had in the Trinidad newspapers several articles and if you read the undertone of the articles, they basically looked at our resources as how can they really take it to really help them,” he added. Trinidad and Tobago, for example, was caled upon to scrap legislation that prevents foreign honey, such as Guyana’s from transiting that twin-island state to other countries, a situation that had resulted in the seizure of a Guyanese originated consignment of honey several years ago.

Boyer assured that the Guyanese business community was not taking a selfish posture on foreign investors in Guyana’s oil and gas sector. “Us saying ‘local content’ is not a self-interest only. I always say that we can help to reduce the operational cost for the operators as well so this thing has a two-sided interest,” he said.

The GCCI assured that Guyanese businesses have the capacity to supply high quality services and goods, including food and water-all of which are being imported for the offshore operations- while local companies were not being favourably considered.