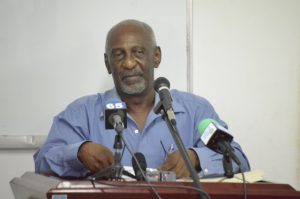 As the Ministry of Education hopes to get the Guyana Teachers Union back to the mediation table and break an almost two-week old strike, Junior Labour Minister Keith Scott on Tuesday apologised for calling the educators “selfish and uncaring”.

“I would like to offer my sincerest apologies to the teachers of Guyana. I regret making such an inflammatory and hurtful statement,” said Scott who is responsible for mediation in labour disputes should negotiations fail.

“I have always and will always hold the teachers of our nation in the highest regard,” said Scott who is from the National Front Alliance, one of the very small political parties in A Partnership for National Unity component of the governing coalition.

The Junior Social Protection Minister sought to assure teachers that he did not intend to disrespect them by his labels last week.

“It was never my intention to be disrespectful of, or to downplay the legitimate industrial actions taken by the Guyana Teacher’s Union on behalf of its membership and teachers generally,” he said.

Only Monday night, Minister of Education Nicolette Henry shied away from saying whether Scott’s utterance had further poisoned  the Labour Relations climate.

Henry reiterated that the mediation process was not exhausted and it is only after that happens that the arbitration process can kick in.

While the Teachers Union sources estimate that as much as 3,000 government-employed educators abandoned their classrooms, the Ministry of Education said just over 1,000 or about 10 percent of the entire workforce stayed away from schools countrywide.

The Ministry of Education has since deployed trainee teachers, retirees and volunteers at some schools and has said that it would hire others from an available pool of 2,500.

Government has ditched the Guyana Teachers Union’s demand for a 40 percent pay hike for 2016 and five percent annually from 2017 to 2020.

President David Granger at the weekend said government was searching for more funds to increase its offer for this year alone as he prefers negotiations for a multi-year agreement to commence from 2018 onwards.

Government so far has said it could only afford GY$700 million for teacher’s salaries and GY$200 million to adjust some salary scales.

If the Finance Ministry were to give in to the 40 percent demand, at least GY$4 billion more would have to be added to the government’s wage and salary bill.