Striking teachers abandoned classrooms countrywide while others remained on the job 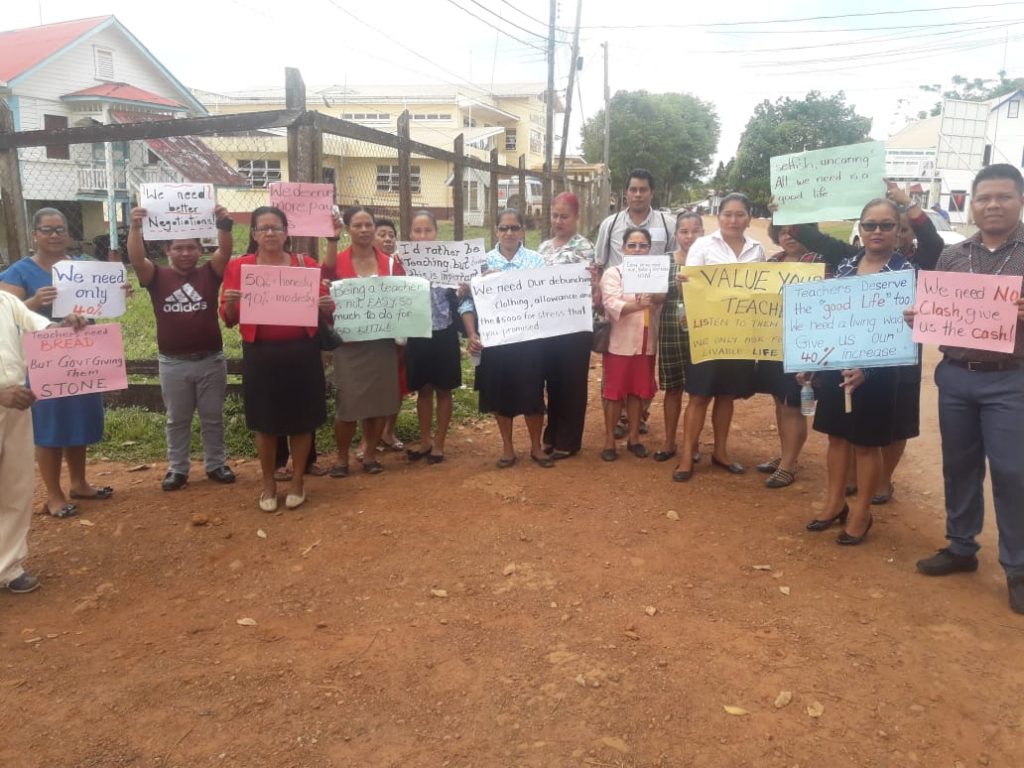 Teachers in Mabaruma vent their frustration on these placards.

Numerous teachers across Guyana stayed away from classrooms at government-run schools, even as the Ministry of Education deployed scabs comprising retired and trainee teachers to cushion the impact of a strike that has entered the second week to press demands for increased salaries.

In other schools, some or all of the teachers ignored the call for industrial action by the Guyana Teachers’ Union (GTU).

Minister of Education, Nicolette Henry said ahead of a planned news conference Monday night, that an assessment of the impact of the strike was still being conducted but most schools opened on Monday, the first day for the new academic year. “We are looking at the numbers but we were able to have most schools opened today and, of course, we are looking at numbers in terms of where we need to make the adjustment,” she told Demerara Waves Online News.

In Georgetown, teachers braved heavy downpours and picketed and chanted outside the headquarters of the Ministry of Education in a move aimed at intensifying the pressure for the government to cave into calls for the long-running pay dispute to be sent to arbitration because they have no faith in the conciliation process. That’s because the union believes that the Labour Department of the Ministry of Social Protection has deliberately shown its bias against the teachers after they were called upon to accept government’s pay offer of GY$700 million and GY$200 million for adjusting some salary scales.

Across in Linden, teachers chanted, in clear reference to the Minister of Education, that ““Henry is a yard-fowl and we gon pressure she”, a sign that the educators were not about to let up  in their demands. The teachers say they are no longer interested in negotiating from their original demand of 40 percent downwards and the time has come for arbitration.

In fact, the environment for mediation last week appeared to have been further poisoned by Junior Minister responsible for Labour, Keith Scott’s outburst that the teachers were “selfish and uncaring”. The Guyana Trades Union Congress (GTUC) criticised Scott saying that he demonstrated utter bias despite the fact that his ministry is the legal custodian of the mediation process.

Teachers on staff at Precious Jewels Nursery School turned out in full numbers, despite the strike call by the Guyana Teachers’ Union.

The GTUC called on President David Granger to sanction Scott for his “crass conduct”, especially if it does not represent the official position of the Guyana government.

“GTUC have no confidence the Minister can conciliate in the matter because of his open bias and hostility against the workers and their Union. The Minister’s utterances has justified the call by the GTU that the issue of salary and working conditions be addressed by an arbitration panel for he has disqualified himself to be an impartial facilitator in the conciliation process,” the umbrella labour organisation said in a statement.