About 10 percent of teachers on strike; Education Ministry deploys 500 substitutes 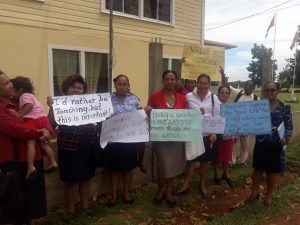 Teachers in Mabaruma on the picket line.

The Ministry of Education on Monday night reported that about 10 percent of public school teachers across the country went on strike to pressure government to take a pay dispute to arbitration.

Authorities also signaled that steps were being taken to tap into a database of 2,500 persons to hire them temporarily to teach students in affected schools.

The Guyana Teachers Union (GTU) did not provide its assessment of the impact of the strike which entered its second week, the first having been the pre-term week when orientations and other preparations are done.

Based on statistics released by the Education Ministry, at least 1,065 of the 10,615 government teachers stayed away from classrooms on Monday, the first day of the new school year. More than 500 persons were deployed under the contingency plan.

As far as closure of schools was concerned, only 34 of the 929 schools were shuttered due to the strike action. The hardest hit was Region Nine (Upper Takatu/Upper Essequibo) where 12 of the 83 schools did not open their doors and Region 10 (Upper Demerara/Upper Berbice where 11 of the 60 institutions remained closed. Only three of the 142 schools in Region Six (East Berbice/Corentyne) and two out of the 75 in Region Five (West Berbice) did not open their doors for classes. In Region One (Barima/Waini), five of the 72 schools did not open.

Officials said overall, there were 171 volunteers and retired teachers in addition to over 90 percent of the 400 pre-service and in-service trainee teachers were deployed to strike-affect schools on the coastland.

The 2,500 persons on standby include retired teachers, volunteers, trainees and applicants to the Teaching Service Commission. “We are certainly recruiting temporary teachers at this point in time,” Minister of Education Nicolette Henry said.

The officials said no figures were immediately available for Region Five (West Berbice) where there is a total of 690 teachers and Region Seven (Cuyuni-Mazaruni) where there are 299 teachers.

Henry said the ministry would be actively recruiting temporary teachers as part of efforts to adjust its contingency plan, but none of the accompanying officials could say how much that is projected to cost the Ministry of Education’s coffers.

Acting Permanent Secretary of the Ministry of Education, Adele Clarke has estimated that the 40 percent salary increase the teachers are demanding from government for 2016 could cost an estimated the treasury an additional GY$4 billion.

Henry insisted that the Ministry of Education was not about to give into the GTU’s demand for the salary dispute to be sent to arbitration because in her view the mediation process has not yet been exhausted. “For due process to occur you will have to go through and exhaust all of the processes,” she said.

Touching on concerns about the quality of teaching that was being provided by the volunteers, trainees and retirees, Chief Education Officer Marcel Hutson said, “I don’t see the teachers as not being competent or capable. I think what they need is our encouragement and support because they are attempting to do something good.”

“Rather than for us to berate them or to pull them down, it would be prudent for us to encourage them because they are attempting to contribute to the alleviation of a problem that we don’t want to exist where our children are concerned,” he said.

The union has already stated that it has lost faith in the conciliation process because the Junior Labour Minister, Keith Scott and the Chief Labour Officer had urged the teachers’ union to accept government’s offer of GY$700 million for salary increases this year and GY$200 million to adjust some salary scales. However, the Education Minister shrugged off questions about whether she believed that Scott’s latest characterisation of the teachers as “selfish and uncaring” has further soured the industrial relations climate. “I could not determine what Mr. Scott should or should not do at this point in time. That would be a matter that Mr. Scott would have to address,” Henry said.

The Guyana Trades Union Congress earlier Monday flayed Scott for his remarks and called on President David Granger to scold that minister if those views did not reflect government position. The umbrella trade union organisation said Scott was no longer an impartial conciliator whose aim is to resolve the dispute or exhaust mediation. “GTUC have no confidence the Minister can conciliate in the matter because of his open bias and hostility against the workers and their Union. The Minister’s utterances has justified the call by the GTU that the issue of salary and working conditions be addressed by an arbitration panel for he has disqualified himself to be an impartial facilitator in the conciliation process,” the confederation said.

President David Granger last weekend said his administration preferred to discuss a multi-year agreement going forward, instead of going back to 2016.