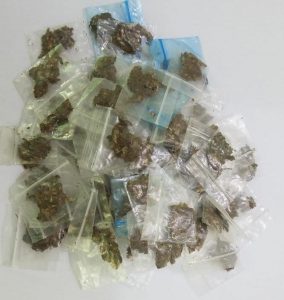 Even as more prison guards and civilians are being busted for smuggling marijuana into the jails, Director of the Guyana Prison Service, Gladwin Samuels has welcomed government’s decision to scrap jail terms for the possession of small amounts of marijuana for personal use.

At the same time, Samuels is recommending that tough legislation be put in place to specifically punish law enforcement agents who are caught with marijuana. “Persons, who are working at the prison in whatever capacity, must not be allowed to be in possession of or to traffic this substance into the prison despite whatever quantity it may be. The prison remains an institution that focuses on safe custody and retraining of offenders and if we allow persons to be able to access marijuana, then I think that will be defeating the purpose behind the government’s move to decriminalise the possession of small amounts of marijuana,” he told Demerara Waves Online News.

His reaction to President David Granger’s announcement at the weekend that the Narcotics and Psychotropic Substances Act would be amended to soften penalties for the possession of small amounts of marijuana for personal use when Parliament comes out of its annual two-month recess in October came even as two prison guards resigned after they admitted to smuggling 398 grammes of marijuana into the Lusignan Prison. A prisoner was also on Saturday arrested  for being in possession of 71 packets of marijuana concealed in a pair of slippers he was wearing.

“We (government) have taken a decision, in principle, that custodial sentences for the possession for small amount of marijuana for personal use would be legally abolished but after the National Assembly comes off of its recess you could look forward to that legislation being passed. So it is already a decision which is agreed within the Cabinet and we have no difficulty in implementing it,” Granger told a news conference on Friday.

Commending  government’s move, the Director of Prisons said softer penalties for the possession of small quantities of marijuana would help to reduce the prison population. “I am of the view that small amount is still to be determined by a specific quantity, but even if ten grammes are used , there is likely to be a significant reduction in the prison population and this will also contribute to saving the government of Guyana and taxpayers of Guyana a significant amount of monies which are used for the feeding, medical, housing and other expenses associated with keeping persons in prison,” he said.

He said 345 of the just over 2,200 inmates are imprisoned for possession, trafficking and cultivation of the prohibited plant.  It costs about GY$545.00 to feed one prisoner each day, he said. 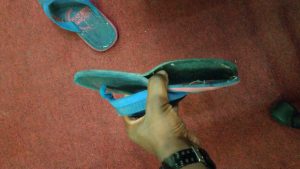 The slippers in which the packets of marijuana were concealed.

Asked if he believed that there would be increased smuggling or attempted smuggling  of ganja into the prisons due to non-custodial penalties, the Director of Prisons stressed the importance of special provisions to make the penitentiaries off-limits to marijuana regardless of the amount.

“Without specific guidelines persons are likely to arrive at the prison with same. Institutions like Prisons must be off specially protected. Without that staff and other visitors to the prison will attempt to enter with amounts they are not likely to be prosecuted for,” Samuels said.

A Commission of Inquiry into disturbances at the Georgetown Prison also recommends an end to jail terms for small amounts of narcotic possession.

Alliance For Change (AFC) parliamentarian, Michael Carrington three years ago had tabled an amendment to the anti-narcotics act to provide for non-custodial sentences instead of the mandatory three years imprisonment for the possession of five grammes (less than one ounce) of marijuana. A Partnership for National Unity (APNU) section of the coalition had found several reasons not to allow debate of the Bill.

However, government’s recent decision to  abolish jail terms for marijuana possession for personal use followed a recommendation by the Caribbean Community (CARICOM) on Marijuana in its report to the annual summit of regional leaders held last month in Jamaica.

The Prisons Director on Saturday reported that on Tuesday, August 28, 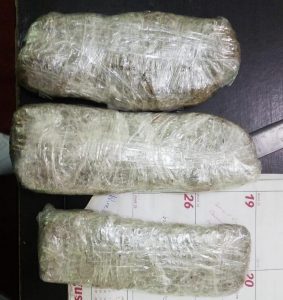 The marijuana that was taken into the Lusignan Prison by prison guards. After they were caught, they resigned immediately and were handed over to police.

2018 at the Lusigan Prison a  prison guard who was scheduled to work from 6 PM to 6 AM instead arrived for duty at 8:04 PM. He reportedly had marijuana and cigarettes in his possession.

“The presence of the contraband in the prison became known and the Gate Keeper alerted the rank that brought it in. The said Gate Keeper opened the gate to allow the rank to get rid of the contraband. Both ranks, when confronted, confirmed the information was true and tendered their resignations. The matter was however reported to the police for investigation and possible charges. The marijuana amounted to 398 grams.,” Samuels said.

At the Lusignan Prison, also, an inmate was arrested Saturday afternoon with 71 grams of marijuana in his slippers. “The slippers he was wearing was not the one he left the prison with….Prison Ranks on duty conducted a search on him after he returned from delivering meals at the Holding Bay. He is currently in prison for larceny serving a one year sentence,” the Prisons Director said.

Across at the New Amsterdam Prison on Saturday afternoon, Samuels said a civilian driver was detained after the truck he was driving was searched by a policeman on duty at the prison and four packs of cigarettes were found behind the driver’s seat. “He is a frequent deliveryman of dietary items to the prison. No declaration was made prior to the search. The information was reported to Central Police Station,” the Prisons Director said.

Several months ago, employees of a privately-owned garbage collection and disposal company were arrested for smuggling narcotics into the Lusignan Prison.

2018-09-01
Denis Chabrol
Previous: OPINION: The return of David Granger-let it be done
Next: Policeman, who failed alcohol test, arrested for killing motorcyclist with force’s vehicle