Guyana on high alert for foot and mouth disease 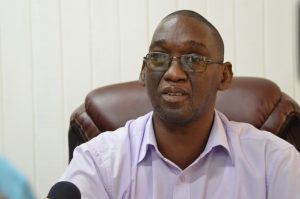 The Guyana Livestock Development Authority (GLDA) is on high alert for foot and mouth and other vesicular diseases following confirmed cases in Venezuela.

Head of GLDA’s Animal Health Unit, Dr. Colbert Bowen says following confirmation of the disease presence the by the World Organisation for Animal Health (OIE), the Guyana Livestock Development Authority (GLDA) has dispatched a team to Region One, Guyana’s closest border region with Venezuela, to prevent the importation of animals and animal products, which aid in the transmission of the disease.

“We have sent in a few officers there led by one of our veterinarians and they are presently on the ground in Region One, specifically in the Mabaruma because of the influx and movement of people from Venezuela. Because of the situation in Venezuela, there is always the threat of somebody wanting to bring over a live animal or some sort of meat from those animals that are affected to Guyana. So, it was necessary for us to mount a monitoring surveillance operation in those areas so that we could reduce the probability of somebody bringing those animals and products into Guyana,” Dr. Bowen was quoted as saying by government’s Department of Public Information.

The veterinary doctor advises that should the symptoms of vesicular diseases be observed among cattle, swine, goat and sheep or other split hooved animals immediate contact should be made with GLDA on the telephone number 220-6557.

“A vesicle is basically what we call a boil. So, you might find a boil in the mouth of the animal, drooling and when you look at it you might find them off feed. Secondly in going with the name foot and mouth disease it affects the hoof of animals, so you’ll find just above the hoof of the animal the same raised boils and separation of the hoof on the animals.  The animals might be off feed, might be drooling, you’re going to see them limping, lameness in the animals,” he explained.

According to Dr. Bowen, of the various animals affected, swine are more severely affected in terms of lameness. There’s a clear sign of separation of hoof in swine while cattle show separation of hoof, lameness and them being affected with vesicles in the mouth. However, in sheep and goat, the signs and symptoms are not so clear.

Vesicular disease is a general term referring to diseases that cause blisters on various body parts of livestock and, in some cases, humans. Included in this category are Foot-and-Mouth Disease (FMD); Vesicular Stomatitis (VS); Swine Vesicular Disease (SVD); and Vesicular Exanthema of Swine (VES). Foot and mouth disease is considered the most devasting of them because of its rate of transmission and the capacity to wipe out large herds in a short period leaving economic despair in its aftermath.

Guyana has been deemed free from foot and mouth disease without vaccination. This makes it easier for the country to trade in animals and animal products internationally. In order to maintain this status, the GLDA in collaboration with other local and international agencies earlier this year held a simulation exercise to demonstrate its readiness to deal with any such outbreaks. The exercise received high marks for its state of readiness.