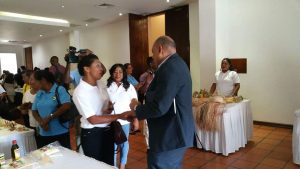 Minister of Natural Resources, Raphael Trotman interacting with a number of the participants in a workshop for gender component in the FCPF REDD+ Readiness Phase with an initial focus on the inclusion of women in REDD+ Readiness.

Women’s experiences in forest management are being harnessed to help reduce the emission of greenhouse gases that cause climate change events such as droughts, floods and storms.

The Ministry of Natural Resources Project Execution Unit (PEU) of the Forest Carbon Partnership Facility (FCPF) Project, in collaboration with the Inter-American Development Bank (IDB), on Friday began a series of workshops across the country aimed at “Readying Women for REDD+”. Minister of Natural Resources, Raphael Trotman remarked that his  ministry hopes “to have far reaching consultations with the people of Guyana particularly those who use the forests and rely on it and need it for their sustenance”.

REDD+ is defined as reducing emissions from deforestation and forest degradation, and foster conservation, sustainable management of forests, and enhancement of forest carbon stocks.

Noting that for the first time since its establishment, five councilors on the executive of the Nati0nal Toshaos Council are women, IDB Country Representative, Sophie Makonnen called on women to break out from the view that their place is in the household and share their expertise in sustainable forest management. 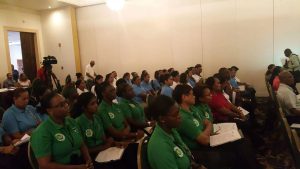 “The design of REDD+ policies and interventions must take into account women’s contribution to decision making at the level of natural resources management and conservation.  There must be an understanding that women bring an awareness and understanding of the effects of unsustainable mining on their children, the impact of in-discriminate forestry activities on their communities as places of shelter and protection and the effects of poor farming practices on the ability to feed their families,” Makonnen told the launch in the first in a series of workshops that was held at the Pegasus Hotel, Georgetown.

The IDB official said women in Africa and Latin America have been shown to use and monitor forests differently than men,  but their role is often poorly understood or simply not acknowledged.

Friday’s inaugural workshop was expected to conclude with discussion on a draft road-map for RED+ and Gender and Women and the establishment of a women’s task force. Ahead of those activities, the IDB representatives called on the estimated 30 participants not to craft a strategy that is driven by men. “Empowering women in the design of REDD+ policies and interventions must not result in reproducing an imitation of the male model of leadership,” she said. 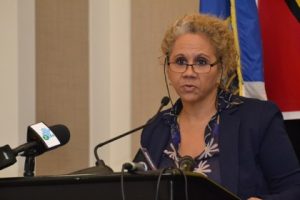 She stressed that empowering women in forest management and conservation is about ensuring that women make decisions as mothers, grandmothers, daughters and as young women “without the fear of judgment in taking on leadership roles.”  “Empowering women in decision making is essential if everyone is to benefit from this country’s bountiful resources,” she added.

The Natural Resources Minister remarked that it was important to ask women, “the nurturers of life” “to ask them how to keep the forest alive and protected.” He commended the IDB Country Representative for resuscitating the initiative.