Families of massacred Lindo Creek miners should be compensated; former President, others should be questioned in a re-opened probe- report 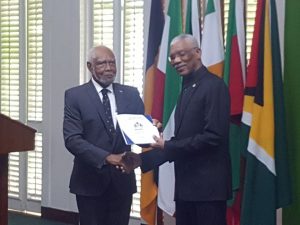 A Commission of Inquiry has recommended compensation for family members of the eight miners whose burnt remains were found at a mining camp  at Lindo Creek, Upper Berbice River area in 2008.

“The basis for recommending compensation is that many of the families have suffered financially from the deaths of their husbands or fathers who were at the time supporting them. They were dependent and now that they have gone, there is no economic and financial support and so we feel that compensation should be given them and that has been so recommended,” Inquiry Commission Chairman, Retired Justice Donald Trotman said shortly after handing over the report to President David Granger.

The Chairman of the one-man commission of inquiry said there were various options for compensation from which the president would choose.

Trotman said other recommendations include “reopening some parts of the investigation” that had been conducted before the inquiry that was ordered by President David Granger.  “Proper measures will be taken, which had not been taken in the Commission’s view, into getting the truth of some of these allegations that were made and some of these actions that were done,” he said.

The Inquiry Commission said the probe did not find anyone culpable but several persons, in their official capacities, should be questioned “so that some explanations be given by them as to their conduct and actions or their non-actions during the material times of 2008 and following”.

Trotman said those persons, who should be questioned, include those performing duties of President, Police Commissioner, Minister of Home Affairs, Guyana Defence Force and other relevant personnel at that time.

The Commission of Inquiry had more than once asked then President Bharat Jagdeo to testify in-camera, but he had declined.

Retired Police Commissioner, Seelall Persaud and now Assistant Commissioner of Police, Clifton Hicken as well as a number of other current and former members of the police force and serving Guyana Defence Force soldiers had testified.

No clear evidence had been led before the inquiry to substantiate claims that police and soldiers had gunned down the miners and burnt their bodies after they had realised that they were not members of the Rondell “Fineman” Rawlins gang.

A then 15-year old boy testified before the inquiry, saying that he had been in the company of the gang members when the miners were killed and burnt. No one else has contradicted that statement with evidence.