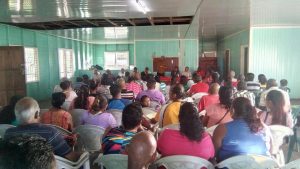 General Secretary of the PPP, Bharrat Jagdeo in the foreground addressing party activists at a recent meeting on the East Bank Demerara (PPP photo).

The opposition People’s Progressive Party (PPP) has decentralised the selection of candidates for the upcoming Local Government Elections (LGE) with at least 50 percent expected to be non-party members, but they must first have time to attend council meetings, party General Secretary Bharrat Jagdeo announced Thursday.

“We allow the ground; in each of the 81 areas they will do their selection and screening and all of that right at the bottom and then in consultation with the party leadership, we’ll select the final but it’s better because they know the people on the ground rather than Freedom House centrally trying to decide who will be the candidate,” he said.

Jagdeo explained that one of the major constraints is councillors having time to attend meetings because elected officials do not earn salaries and so many of them are “busy earning a living elsewhere”.

Time availability is among 13 criteria that he said the the PPP has drawn up to search for and select candidates for the local government elections scheduled for November 12, 2018.

“We are going to ask them right upfront -the candidates who are going to come on the list: would you have the time to serve and to volunteer because they may not have the time and the work of the NDC (Neighbourhood Democratic Councils) or the municipality would suffer,” he told a news conference. Would-be councillors, he said, would also be expected to be available for training because the experience has shown that many councillors do not participate in such activities.

The criteria includes 50 percent of the candidates to be selected by the PPP at the central level and the other 50 to be drawn from members of civil society and grassroots organisations “who may not be party members  but we would like to have them on our list and who have skills and who can relate to the community”.

Those from civil society, he said, must be well-known persons of good repute, law abiding and involved in community and social work, members of youth organisations, religious leaders, teachers, Parent Teachers Associations and policing groups. At the same time, he indicated that the councillors would be expected to abide by the party’s promises. “They have to give a commitment that they will support and defend the positions we campaign on,” he said, adding that those could include no new taxes and greater transparency in revenue collection and expenditure.

Candidates, he said, would be expected to possess good interpersonal skills especially to avoid the PPP getting a “bad name”.

The PPP hierarchy has been on a series of fan-out meetings with activists across locally governed communities in Guyana.

2018-08-02
Denis Chabrol
Previous: Families of massacred Lindo Creek miners should be compensated; former President, others should be questioned in a re-opened probe- report
Next: Granger defends appointment of Environmental Economist to head Energy Department