One of two men accused of robbing a Nicaraguan doctor was hours later shot by police and arrested.

Police said the 40-year old man is a carpenter who lives at Laing Avenue.

Investigators said he has admitted to have only aided in the escape of the other suspect from the scene.

The Guyana Police Force said a gun , believed to have been used in the robbery, was found in possession of the suspected bandit.

Investigators said they were making efforts to arrest the second suspect.

The doctor was robbed of cash and documents by two identifiable men on a scooter  at Croal Street,Bourda, Georgetown at about 10 AM Wednesday. 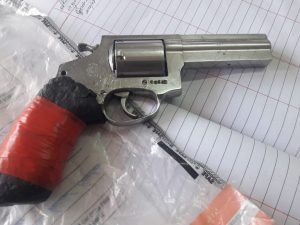 The gun police believed was used during the robbery of a Nicaraguan doctor.

Police said when the suspect was cornered on Leopold Street, Georgetown, an unlicensed silver .38 Special Revolver was concealed in his crotch,which is reportedly identical to the one used in the commission of the crime.

“During the process of retrieving the weapon ,the suspect received an injury to his face when he resisted and scuffled with the policeman ,in a bid to escape,” the law enforcement agency said.