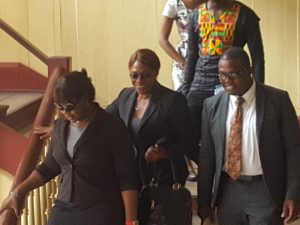 In making no-case submissions before Principal Magistrate, Judy Latchman, the lawyer told the court that the charge against Westford was bad in law because constitutionally Westford, as a government minister, was not a public officer from 2011 to 2015. “A minister of government is excluded from this definition of a public officer,” Todd said.

He reasoned that Westford and Cummings were jointly charged but there was no case against the two and moreover Westford should not have been before the court because her charge was bad in law.

He added that there was no evidence that Cummings unlawfully diverted monies signed and accounted for to her own use. “The evidence is that she received monies. There is an inference that monies were in these envelopes,” he said.  “The evidence led by the prosecution does not in any way implicate Cummings in conducting any illegal act,” Todd added.

The Attorney-at-Law said the prosecution also failed to show that anything done by the former Principal Personnel Officer at the Public Service Ministry was a criminal act or that she acted in consort with someone to steal monies and to deprive the government from their use.

Todd said the prosecution did not establish that monies were stolen, Cummings stole GY$10 million, was responsible for that cash, responsible for collecting and counting it and collected it by signature.

Cummings and Westford were charged in February, 2016 with stealing GY$639 million between August 2011 and April 2015 from the Government of Guyana. The money was allegedly stolen in 24 different tranches ranging from GY$3.4M to GY$75M in one instance.

Westford is a Central Committee member of the People’s Progressive Party and one of its parliamentarians.