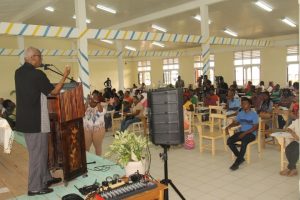 “One of the functions that must permeate GECOM and those who function in it, as for example you, is that you have to see that elections are run free and fair,” he told the opening of a two-day train-the-trainers workshop at the Cyril Potter College of Education (CPCE).

Patterson said although Guyana is “in its infancy” as an independent country, the country was not doing too badly compared to violence-torn Mexico where 130 politicians were recently killed.

“Democracy and free and fair elections are like conjoined Siamese twins. You can’t get one without the other,” he said, adding that that such qualities depend on polling day staff trainers.

The GECOM Chairman’s reference to free and fair elections came against the background of recent concerns by the opposition People’s Progressive Party (PPP) that a plan was probably being hatched to rig the 2020 general elections. The PPP has cited, among other things, President David Granger’s unilateral appointment of the GECOM Chairman, despite the submission of three lists of six names each. The High Court has since upheld the constitutionality of Patterson’s appointment, but the PPP has moved to the Court of Appeal.

A GECOM official told Demerara Waves Online News 374 persons were shortlisted from 612 applicants to pursue the in-house training. From that number, 80 would be selected to train polling day staff. On Saturday, 124 persons were expected to attend the workshop at CPCE and 94 at Lodge Secondary School.

In terms of pre-election day activities, participants are expected to be taught staffing and list of duties, layout of polling stations, proxies and certificates of employment, Disciplined Services balloting, and methodology and sorting of materials for election day.

The training components for election day activities are before and during the poll, authorised persons, the voting process, intermixing of Disciplined Services Ballots, close of poll, after close of poll, the count, recount and resolution of ties.

2018-07-14
Denis Chabrol
Previous: Big drugs bust in wooden boat at Mon Repos; boat owner, wife arrested, Venezuelans wanted
Next: “Who is mixed and who determines who is mixed?” ERC Chairman on PPP’s claim of almost 100 percent Afro-Guyanese at GECOM