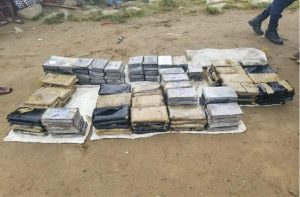 The marijuana and cocaine that CANU said they found aboard a wooden fishing boat at Mon Repos Channel, East Coast Demerara.

A Guyanese man and his wife were early Saturday morning arrested in connection with the interception of more than 140 kilogrammes of cocaine aboard a wooden fishing vessel near the Mon Repos channel, East Coast Demerara, the Customs Anti- Narcotics Unit (CANU) said.

The captain, known only as “Dive and Shoot” of Mon Repos Foreshore, East Coast Demerar escaped. CANU said sever Venezuelans were also suspected to have been involved. “Several other persons of interest including Venezuelans are at large.” 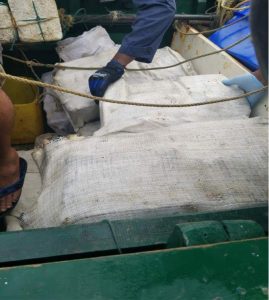 The bags of cocaine and marijuana in the wooden fishing boat

CANU said it’s agents early Saturday morning   conducted an operation on the East Coast of Demerara where several locations used for docking of fishing vessels along the East Coast Sea Wall were reconnoitred and Sometime after 04:00 hours a suspected fishing vessel seen approaching a docking location at the Mon Repos Channel was eventually interdicted.