University of Guyana launches Alumni Associations in Toronto, London and Washington this month 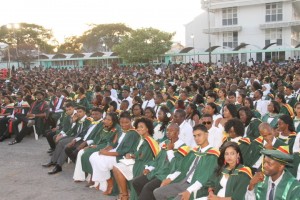 The University of Guyana (UG)  says it is is actively and intentionally reaching to embrace its own who are in the Diaspora with a series of strategic and structured events over this summer.

UG will first rejuvenate the Toronto Guild of Graduates  on July 19 and  will launch an alumni association in London on August 3rd .

“ Reignite ” is the Canada event billed for Thursday, July 19  from 6 to 8pm at the Tropicana Community Services Hall at 1385 Huntingwood Drive Scarborough , MIS 3J1, ON.   The theme reignite is being used since a UG Guild of Graduates has been working since the early 1970’s under the leadership of Harry Hergash and a dedicated group in Canada. That group will adopt the recently sanctioned Constitution of The University of Guyana Alumni Association and will seek to increase its membership and infuse new blood into the association starting with the free event next Thursday.  “Reignite”  is collaboration between the University of Guyana’s office for Philanthropy, Alumni and Civic Engagement (PACE), The Guyana Consulate in Toronto, the Alexander Learmond Strategic Leadership Group  and CGX Energy Inc.

However, there has never been a University of Guyana Alumni Association in England. The second event “Reunite” in London, England is an attempt to bring together UG alum and well wishes in the UK. The event is set for the historic Malborough House, home of the Commonwealth Foundation in London, England on Friday Aug 3, from 6 to 9pm.

The Goal of The  UG Alumni Association is to connect graduates,  past faculty,  staff  and supporters of The University in Guyana in a reciprocally beneficial relationship of investing, nurturing, fundraising, mentorship and development.

Among the objectives of the associations are to support the developmental efforts of The University of Guyana; to serve as supporters to fund raising, talent acquisition, research as well as recruitment of staff and faculty; to provide mechanisms and opportunities for connecting, fellowship and sharing, networking, and professional growth and to lend guidance on matters pertaining to the general the welfare of the University or which may be of interest to the Administration, Academic Board and Council.

Members of the  alumni associations are fondly being called “THE PRIDE” because of the association’s logo featuring a majestic lion astride Guyana’s  globally significant  Roraima mounting range.

The international launches were preceded in Guyana in June this year with the launch and installation of two interim Executive Committees of The Pride for Georgetown and Berbice.

Similar associations will be launched this year in Washington DC, in the USA and early in 2019 in the Caribbean.  The University of Guyana has produced over 30, 000 graduates many of whom are trail blazers nationally and internationally. Many of UG’s graduates reside internationally.