“Who is mixed and who determines who is mixed?” ERC Chairman on PPP’s claim of almost 100 percent Afro-Guyanese at GECOM 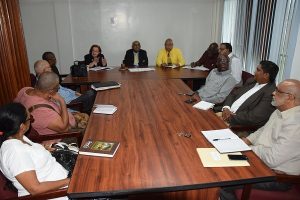 The Ethnic Relations Commission (ERC) is next week expected to begin probing allegations by the opposition People’s Progressive Party (PPP) that mostly Afro-Guyanese are being employed at the Guyana Elections Commission, but already the question is who is a pure race.

“If the pie chart that I saw is authentic, we really have a problem. Who is mixed and who determines who is mixed? Is it name, face?… So we have our work cut out. Nothing is going to be easy going forward but we’ll try our best to be fair,” ERC Chairman, Reverend John Smith said in response to a question by Demerara Waves Online News.

The PPP has already said in a statement following an introductory meeting with the ERC that it does not support a quota system for employing persons. “The Leader of the Opposition stated that the PPP/C does not support the introduction of a quota system. He reaffirmed that the PPP/C stands by the principle of meritocracy, as key to employment in the State (public) and private sectors, as well as to opportunities for scholarships. With specific reference to the hiring of staffers at the Guyana Elections Commission (GECOM), the PPP/C’s concerns related to the need for fair and transparent hiring practices based on merit,” the PPP has said. 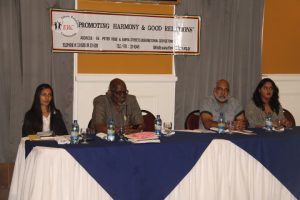 The constitutional commission, the ERC Chairman said, would go ahead with its work pending the hiring of several investigators who are mainly former officers of the Guyana Police Force. “For the investigative arm, we are asking for police officers who would have had a background in doing this. We don’t want somebody to come and be a rookie on the job,” he said.

Probed on the methodology to be used to address the PPP’s complaint that more than 90 percent of GECOM’s employees are Afro-Guyanese and that could be either racist or reflexively racist. the ERC Chairman said after meeting with the parties, the commission would determine whether legal advisers would be called in to assist.

Deputy ERC Chairman, Retired Major General Norman Mc Lean said his team would be meeting with the PPP’s representatives on Monday. “Certainly, we want to hear them first…We must hear that before we address it and we have a meeting arranged with the Chairman of GECOM as well so we have to find out what transpired and so we’ll address it,” he said. Mc Lean further remarked that, “it’s fairness, we’re looking to have a fair approach to whatever it is”.

During the formal session of an event with the media, the ERC Chairman appealed for fair and accurate reporting especially in an era where everyone wants to break the news first. “We beg of you- check your sources, follow the facts…Let us work together to achieve social cohesion,” he said.