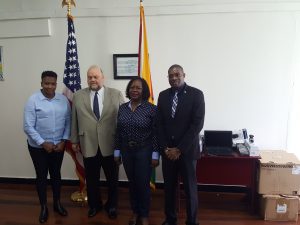 The United States (US) on Friday said it has so far spent more than US$100,000 to help Guyana tighten its maritime port security, resulting in increased compliance with the International Shipping and Port Security (ISPS) code that helps minimise terrorist threats.

American Ambassador to Guyana, Perry Holloway said assessments by the US Coast Guard cost about US$100,000 and a Port Security Access Card (PSAC) system that costs just under US$8,000 have all combined to strengthen security at Guyana’s seaports.

The PSAC system, which is similar to that used in the US, was handed over Friday by Holloway to Minister of Public Infrastructure, David Patterson who holds ministerial responsibility of air and seaports. “This ID card programme will allow MARAD to have greater governmental oversight on who is allowed access to International Ship and Port Facility (ISPS) Code compliant facilities in Guyana,” the American envoy said.

Guyana adopted the ISPS code in 2004 following a terrorist attack in 2001, but apparently lagged behind in its full implementation.

“One of the weaknesses that we identified was access to the port. It was quite easy to get access to the port and now it’s going to be much more difficult and not only is it difficult but if there is need for an investigation or there are accusations, they are going to be able to go this electronic system and have a record of who was in the port, at what part at what time,” he said in response to a question from Demerara Waves Online News. He said almost all of the deficiencies was related to either monitoring, inspecting or reporting- the three basic functions.

He announced that persons desirous of working as Port Security Officers would have to be trained in ISPS security, first aid, security communication, and skill at arms. Guyana’s Maritime Administration has been tasked with holding sensitization programmes with owners and operators of the port facilities before implementation of the card system.

Patterson said heightened maritime port security was partly linked to Guyana’s oil and gas sector. “This is particularly important and relevant now that we are expanding our maritime facilities with the advent of oil and gas shortly,” he said.

The US Ambassador, however, said strengthening maritime port security was not confined to the development of Guyana’s hydrocarbon sector. “The actual tools you use and the techniques you use are the same across all aboard so it’s not destined for the oil and gas industry but as you have greater movement through your ports which you are going to have… and so one of the basic thing you need to do is to control who has access to a port and who does not,” he said.

The American diplomat said while oil exploration and production are offshore activities, more vessels are expected in Guyana to provide maintenance and other services and supplies for the oil industry.

ExxonMobil is expected to begin commercial extraction of oil from offshore Guyana in 2020.