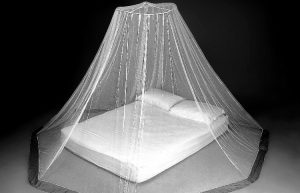 The National Malaria Programme (NMP) of the Public Health Ministry will spearhead the distribution campaign of the Long-Lasting Insecticide-treated Nets (LLINs) from June 03-09 in Upper Takutu/Upper Essequibo (Region Nine) in time to beat the annual heavy rainfall which triggers flooding and other hardships including transportation.

Distribution of LLINs will then move to Region 7 (Cuyuni/Mazaruni) from June 10 -16; followed by sharing from June 17 -23 in Barima/Waini (Region 1) and concluding in Potaro/Siparuni (Region 8) in the week of June 24 –30.

The 91,000 LLINs were procured with financial backing from the Guyanese government and Global Fund. Dr Horace Cox, Director (ag) of the Vector Control Services (VCS) gave the breakdown as 57,000 slated for permanent residents and the remaining 34,000 for the mobile population comprising mainly miners and loggers in the four “endemic (malaria) regions”.

In the last five years, Regions 1, 7, 8 and 9 have accounted for more than 95 percent of all malaria cases in Guyana and the MOPH has begun coordinating transporting the LLINs to the interior regions with assistance from the Guyana Defence Force (GDF); the Guyana Forestry Commission (GFC); the Guyana Gold and Diamond Miners Association (GGDMA); the Guyana Geology and Mines Commission (GGMC); and the National Miners Syndicate (NMS) of Guyana (a grouping of 14 smaller syndicates) its President Ms Cheryl Williams confirmed Saturday.

According to the last Multiple Indicator Cluster Survey (MICS) carried out here in 2014, some 31 percent of the population that resides in the malaria endemic Regions 1, 7, 8, 9 had access to LLINs. “That almost 70 percent of the population in danger of contracting malaria did not have this core preventative tool used as a barrier to malaria transmission concerned the MOPH and the Guyanese government,” the Public Health Ministry said in a statement.

The World Health Organization (WHO) reports that the use of LLINs has contributed significantly to the reduction of the global incidence of malaria during the past decade. Authorities say for Guyana, this means there is an important need to increase coverage and use of preventative measures, particularly LLINs, in the country.

Universal coverage – access and use – of LLINs is a priority goal for the populations at risk for malaria in Guyana. The term ‘Universal’ suggests that the target is for 100 percent of the population to sleep under a LLIN every night, the June campaign’s ideal goal.

However, it is generally accepted that a coverage of 80 percent of the population sleeping under LLINs every night is considered as the minimum coverage needed to have an impact on malaria transmission among the ‘at-risk’ population.

The Public Health Ministry said the anti-malaria campaign faces several push-backs: firstly, there is limited access to health services in some villages within the four ‘endemic regions’; secondly, in some instances the nearest health
service maybe miles away from the villages forcing residents to utilise alternative treatment such as bush medicines.
“Self-treatment is common in Guyana and may be a contributing factor to artemisinin resistance,” a
research finding on the issue here observed.

Thirdly, there are other challenges to containing malaria spread in the four targeted areas. A major one is the attitude of Regions 1,7,8, and 9 residents. The research concluded that “people do not use repellents when they are exposed to mosquito bites during the hours before bed time.”

According to the findings, fourthly, permanent and mobile residents “do not complete the recommended dose of treatment even though the treatment is free”. It said some residents abandon the treatment “the moment they feel better” while others keep the left-over treatment for the next round of infection or share it with their neighbours, who might have contracted the mosquito-borne ailment.

The architecture of interior houses is the sixth major hindrance to the country’s ongoing anti-malaria fight because they are “rudimentary offering very little protection from mosquito bites thereby increasing the risk of infection and possible transmission,” the findings said.

Finally, some patients may be illegal immigrants from countries sharing border with Guyana and are operating without license in the mining and logging industries and are understandably fearful of “seeking help at the nearest government health facility” lest they run the risk of facing the local law- enforcement system.

Under the NMP monitoring of LLINs distribution will be “on-going and continuous, working to ensure that planned distribution activities are completed in the specified time and meeting the stated objectives,” a document said.
“All distribution will have an assigned supervisor/activity lead who will be responsible for overseeing the implementation, reporting and other activity-specific work,” the document states.