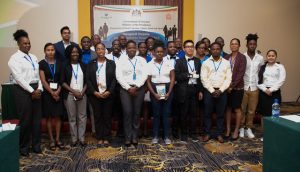 After pitching their ideas in the Jaguar’s Den, 11 young entrepreneurs successfully secured funding to either start or expand their businesses as the Youth Business Summit came to a close.

The young businesspersons now have access to funding from GY$500,000 to GY$1 million.

Omica DeSouza who travelled from Region One, Port Kaituma to participate in the Youth Business Summit, did not have any regrets. She was one of the winners who secured funding to expand her snackette by adding a gaming shop.

“It makes me feel I am worth it. I have been trying and trying. I failed a few times but I kept going and at the end of the day I was successful” DeSouza  was quoted by the Guyana government’s Department of Public Information as saying. 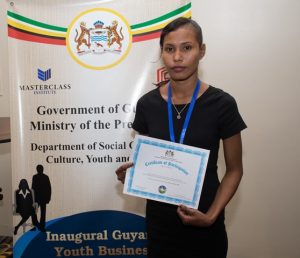 Twenty-one-year-old Liliendaal resident, Vanita Savory, is ecstatic that she can now fulfil her dreams of establishing her ‘savoury mushroom’ business.

The young lady explained that ‘mushrooms’ are “actually a delicacy, you have mushroom soups, you could cook it as a compliment to a regular meal.”

Malcolm Wills, Rashleigh Ferguson and Elton Newton are partners of Dynamic Enterprise, a medical supplies business. They are set to take Guyana by storm with the production of prosthetic limbs via three-

“We are very much grateful for the opportunity afforded to us today, I believe this summit was a great initiative and it gave me a lot of drive to continue in the field of entrepreneurship and business” Wills stated.

Director of Youth Melissa Carmichael-Haynes explained that winning was the first step. A further assessment will be done to determine how much funding each winner will receive. The youth Director said that for those who did not make the cut at the Youth Business Summit, there is still the Youth Innovation Project of Guyana (YIPoG). 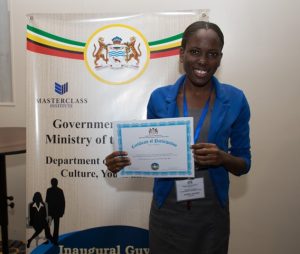 YIPoG has $70Million for young people to access up to $2Million for a community-based project using Science, Technology, Engineering, Agriculture, Anthropology, Archeology, Arts, Mathematics and Spirituality also known as STEAMS. She also pointed out said the Youth Department will continue to provide platforms to empower young people.

Minister of Social Cohesion with responsibility for Youth, Dr. George Norton has said the summit signals Guyana’s move in the right direction to empower young people to be young innovative entrepreneurs

According to the Minister, fostering young entrepreneurs “means encouraging ideas that are innovative and developmental for your communities… we want to equip the youths with all the tools needed for them to turn the ideas that they might have created over the years, the dreams they might have, their ambition into reality.”

The youth participants were also called upon to use the business summit to change the business and employment landscape of Guyana for the betterment of all.

Similar sentiments were also echoed by Minister of Business Dominic Gaskin. He told the participants that owning their own businesses requires more than just self-employment. “It involves becoming the employer and it involves you being responsible for sustaining not just yourself and your family but the family of your employees… we support responsible business as we want to see the creation of a new culture of business in Guyana. We want to see successful young people becoming successful young businessmen and women,” The minister said.

The summit is part of National Youth Week 2018 which is being observed under the theme “Empowering young people to foster national and community development through innovation.”

Prime Minister Moses Nagamootoo has said that the forum provided youths with the resources, tools, networking opportunities and training that will ensure success in entrepreneurship and success as an employed professional in a field of their choice. 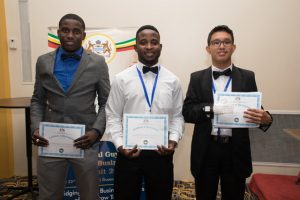 Speaking on the draft Youth Policy, the Prime Minister said the administration has crafted a plan that aims to advance and empower youths in the political, social, cultural and economic spheres. Thereby placing them at the centre of Guyana’s development.

The policy, Prime Minister Nagamootoo said is grounded in the Constitution of Guyana and draws on the direction and best practices from various regional and international groups. Bodies such as the Caricom Youth and Development Action Plan, the International Labour Organisation, the United Nations, the World Programme of Action for Youth