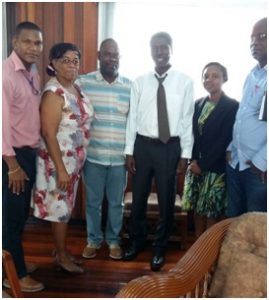 Representatives of the Guyana Civil Service and General Workers Union flank the Representative of the Organisation of American States (OAS), Jean-Ricot Dormeus at a recent meeting to explore the possibility of assistance to ascertain whether the GGMC has been properly scrubbed of mercury.

The Guyana Civil Servants and General Workers Union (GCS&GWU) is seeking international help to ascertain whether a mercury clean-up at the Guyana Geology and Mines Commission (GGMC) building  has been done properly before they move back in.

The union says it has asked the Pan American Health Organisation, United States embassy, United Nations Development Programme and the Organisation of American States (OAS) to  ascertain whether the “recent mercury
decontamination exercise was successful.”

“Further, the assessment will seek to determine whether the decontamination exercise was undertaken in accordance with internationally accepted standards and best practices and whether it would be safe for employees to return to work at GGMC’s headquarters, Upper Brickdam, Stabroek,” the union said.

Although the clean-up has been completed, workers are yet to resume duties there and have been dispatched to other GGMC locations at Subryanville, Georgetown and the former main office of the Ministry of Natural Resources in the GGMC compounds.

A senior union official told Demerara Waves Online News that “the clean up is about finished but the compound will have to be certified as safe by the relevant authorities.”

“Most of the employees were sent on “sick leave” for mercury toxemia and have commenced intense treatment to reverse any impending health defects,” the union added.

The union said during the course of 2018, two GGMC employees died from kidney failure, cases which workers and the union believed were linked to the high levels of mercury in the blood.  “Their deaths are one of the main reasons that the employees and management decided to stay away from work,” the union said.

Above normal levels of mercury can cause: mood swings, nervousness, irritability and other emotional changes, insomnia, headaches, abnormal sensations, muscle twitching, tremors, weakness, muscle atrophy and decreased cognitive functions.Further exposure to mercury can also cause kidney malfunction and respiratory failure, which can both result in death.

Minister of Natural Resources, Raphael Trotman has assured that the Guyana Gold Board, which is also located in the GGMC’s compound, would no longer be burning gold taken to that government purchaser of the precious yellow metal.

The ministry has said that steps were being taken to find a suitable location for the GGB at which gold taken there would be burnt. The Gold Board does not use mercury, but merely torches the metal as part of the purity testing process.