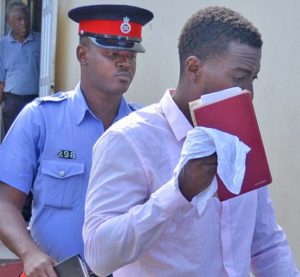 Appearing before Magistrate Tamera Gill, the Evaluation Supervisor admitted that he was in possession 2.325 kilogrammes of cocaine with a street value of 232,500 Eastern Caribbean dollars (approximately US$86,000 / GY$17,983,000).

Despite a stirring application by Attorney-at-Law, Darshan Ramdhanie for Patterson to be fined instead of jailed, the prosecution was of the view that he should face a custodial sentence. Ramdhanie told the court that his client is the chairman of his church’s fund-raising board.

The magistrate ordered the confiscation of US$1,900 that was found in his possession. Grenadian police on May 2, 2018 reportedly intercepted a vehicle in which Derrick Patterson was the driver. The vehicle was searched and the drugs were found inside of a plastic bag.

Derrick is the brother of Guyana’s Minister of Public Infrastructure, David Patterson who has already stated that his sibling “must bear full responsibility for the consequences of his actions” and “neither I nor any other member of my family can take responsibility for his own, deliberate actions”.

Earlier Thursday, 71-year old Guyanese Haniff Bacchus was ordered to immediately pay a $50,000 Eastern Caribbean dollar (approximately US$18,501,000/GY$3,849,000) fine or be jailed for six months after he pleaded guilty to trafficking in seven pounds of cocaine. Anti-drug agents discovered the narcotic stashed in a compartment of his motorised wheel-chair while he was at Grenada’s Maurice Bishop International Airport en route to the United States. Magistrate Gill took into consideration his health, age and the fact that he did not waste the court’s time by pleading guilty to the offence.