Updated: Gun found in possession of dead bandit was stolen from security guard 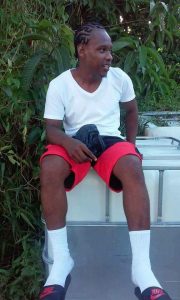 One of the handguns that police said they found in possession of one of two bandits, who were shot dead Friday morning,  was hours earlier stolen from a security guard, investigators found out.

Police sources said the 9MM pistol was stolen from KGM Security guard, Odinga Wills at about 1:30 AM. Sources  said two Chinese nationals were also robbed at the same time.

Hours later at about 10:30 AM Friday two men, who allegedly attempted to rob a hardware store in Georgetown were shot and killed, one by the businessman and the other by police during his escape bid, Police Commissioner Paul Williams said.

Police said they were each armed with a handgun. One of the men entered the Les Variety Store while the proprietor, Roy Myers, was packing goods to send to his other business at Port Kaituma when one of the suspects placed a gun to his head and demanded cash and jewellery that were in possession at the time.

He said during the scuffle, a shot was fired by the accomplice and the man with the gun pressed the trigger. However, the bandits him snapped and Myers seized the opportunity to access his licensed gun and shoot the bandit.

While the Police Commissioner did not immediately name Dover,  he said the one who fled the robbery scene  and hid in a house was previously known to lawmen.

They allegedly attempted to rob Les Variety Store located at D’urban and Hardina Streets, Wortmanville, but when the businessman opened fire on them and killed Barrow, Dover ran to Hadfield Street, Wortmanville and through an alleyway back to Bent Street.

Dover was struck to one of his legs during his escape. 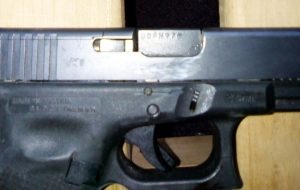 The 9MM handgun belonging to KGM Security Services that was allegedly used by a man in an attempted robbery.

Police Commissioner, Paul Williams told Demerara Waves Online News that in an attempt to elude lawmen, Dover opened fire on police and he was  shot dead during the exchange. “Police awaited him for quite some time but then they made an effort to go in to  get him because he was injured and he first discharged rounds at the police and the police returned fire,” he said.

There were no immediate reports that cash or other valuables were carted off, and neither the businessman nor any of the policemen was injured.

Demerara Waves Online News was told that a 13-year old child and father were arrested as part of a probe that they might have harboured Edwards.