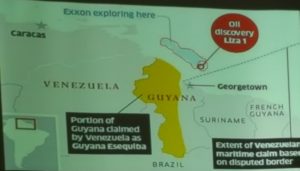 “TIP-TO-TIP”: The ExxonMobil concession offshore Guyana from Barima-Waini in the west to Corentyne River in the east”

Guyana is not eager for ExxonMobil to relinquish any of the 60 blocks on the offshore concession that extends to the borders with Venezuela and Suriname, Natural Resources Minister Raphael Trotman.

He said the ExxonMobil block should “remain intact” as it had been granted in 1999 because “we believe that the circumstances have not diminished”.

Contradicting critics that the handing out of such a large number of blocks was illegal, he said the regulations allows the minister to consider the granting of more blocks in special circumstances.

He told a bi-partisan parliamentary committee on Natural Resources that ExxonMobil was picked by the then People’s Progressive Party-led government and continued to receive support by the APNU-AFC coalition-led administration because of mainly security reasons in light of Venezuela’s border claim to the Essequibo Region.

Noting that on May 26, 2015, Venezuelan President Nicolas Maduro had unilaterally extended his country’s maritime boundary to take in waters off Demerara County where Liza One is located 123 miles off the coast of Mahaica, the Natural Resources Minister said Guyana wanted to “work with a company with international gravitas” and political and economic linkages.

Concerning the still controversial US$18 million signing bonus, he said government used the benchmark of US$12 million that Guyana had asked CGX Energy to fund the maritime boundary dispute case with Suriname at the United Nations Tribunal on the Law of the Sea. Using that figure, Trotman said ExxonMobil was asked to help with legal fees for the Guyana-Venezuela boundary controversy case at the International Court of Justice.

Asked by Chairman of Natural Resources Committee, Odinga Lumumba  whether there was any letter to that effect, the Natural Resources Minister said “you will not find that in any office” and “no, I did not write Exxon. We asked Exxon for support”.

Among the differences in the updated 2016 contract with ExxonMobil Trotman said was a stabilisation clause that is contained in an agreement with the American company, Anadarko, whose seismic research vessel had been seized several years ago by Venezuela’s military.

Trotman said the stabilisation clause was aimed at comforting ExxonMobil that the Guyana government would not make any changes because of the threat.

“We wanted to anchor Exxon in our waters and to let them know that we are serious,” he said.

The Natural Resources Minister recalled that back in 1999 , the United States government had declined to offer no-objection to Beal Aerospace to set up a satellite launch site in the North West District because of “strenuous opposition” from Venezuela.

Trotman said the previous and current governments of Guyana have always recognised the importance of encouraging large, influential American companies in the Essequibo Region.

The Minister says the offshore concession to ExxonMobil from the Barima-Waini in the west to Corentyne River “was not happenstance; it was deliberate to cover the seaspace tip-to-tip and that company will be an American company”.

He said Guyana opted to update its agreement with ExxonMobil because of strategic reasons and that threat has not “disappeared but deepened”.

So far, pending disclosure of analysis of the quality and quantity of additional discoveries, the Guyana basin so far accounts for 3.2 billion barrels of oil.