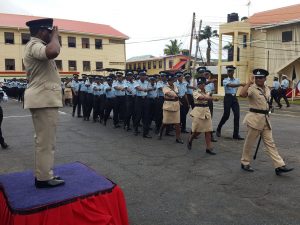 Acting Police Commissioner, Paul Williams taking the salute at the passing out of 150 newly-trained members of the Guyana Police Force.

Police Commissioner, Paul Williams on Friday charged 150 newly-minted members of the Guyana Police Force not to discriminate against anyone including those of different sexual orientation, and they should prepare themselves to treat foreigners properly.

“There should be no discrimination as to sex, race, religion, ethnicity, sexual preferences and relationships. Show respect for all human rights and constitutional rights,” said Williams who is tipped in some circles to be appointed by President David Granger as the next substantive Police Commissioner.

Ahead of the full constitution of the Police Service Commission, the Ministry of the Presidency had conducted an assessment of all of the Assistant Commissioners with a view of the President picking the best candidate.

Acting Police Commissioner Williams’ call for respect for human rights, including persons of different sexual preferences came against the backdrop of concerns over the years at the way Guyanese police generally treat gays and lesbians or respond to their complaints. The General Secretary of the Guyana Trades Union Congress, Lincoln Lewis earlier this week called on gays and lesbians to use their votes as leverage to press the politicians to decriminalise buggery and cross-dressing. 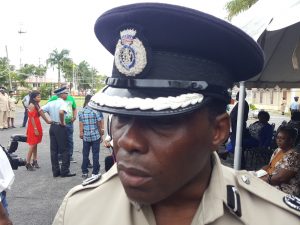 Williams also took the opportunity of urging the graduates to respect foreign nationals irrespective of their nationality, language and disposition instead of possibly risking Guyana’s image. “In these challenges, communicate with your superior and seek help before making decisions that will affect you and the entire Force, and in some cases inappropriate action may affect the entire country internationally,” he said.

He later told Demerara Waves Online News that with an increasing presence of foreigners such as Venezuelans, Cubans, Chinese and nationals of the Dominican Republic, lawmen and law-women need to improve their ability to communicate with foreigners effectively. “If we don’t really get up to speed and build our capacity in that aspect, it simply means that we cannot give them the service that they deserve from a humanitarian perspective,” he said.

He said the induction course provides for the training of persons in Spanish, as part of efforts to better serve foreigners.